Screamers: Carla Garapedian and System of a Down Call For Action 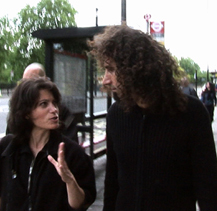 Genocide is one of those things that is difficult for us to wrap our heads around. We can conceive of mass slaughter and rightly decry it as a moral evil as absolute as any that has ever existed, but it is another thing to internalize the horror. To empathize with a suffering inconceivable in our own cushy societal environ is hard and even more difficult than that is to actually take action to stop it.

The film Screamers is a direct attempt to educate and empower people to take just such action. The documentary traces back the origins of genocide to the Turkish decimation of its Armenian population in 1915. It shows not only how genocide has continued since (in Europe, Cambodia, Rwanda, and now Darfur), but how Western government's shirk their standardized genocide mantra of “Never Again,” in favor of non-interventionist policies. In effect, genocide is given a free pass – based on what sometimes appears to be political or economic self interest, and other times seems like lethargy or malaise.

According to Carla Garapedian, one of the film's directors, the goal was not to emulate the many films that simply document a specific genocide, but to engage people on a level at once more conceptual and pragmatic. “If we can isolate [genocide] as a belief and an idea, then people can change it. You can change an idea or a belief; you can't change something that is out of your control,” says Garapedian.

An American of Armenian descent, Garapedian was able to bring her considerable experience as a BBC world news anchor and Emmy winning documentary filmmaker to bear light on the subject, contributing to the film's wide ranging, yet cohesive narrative.

Screamers intersperses concert footage of System of a Down (who are all descendants of Armenian survivors) with interviews from experts, personal accounts of survivors and System lead singer Serj Tankian's attempts to get (former) House Speaker Dennis Hastert to help pass a bill officially acknowledging the Armenian genocide (which is still denied vehemently by the Turkish government).

One of the challenges of this movie for Garapedian was to incorporate the aesthetic of a concert film, with its shots of hyper enthusiastic teenagers, backstage antics and f-bomb laced onstage banter, with the deadly serious nature of the topic. The resulting product is a careful balance.

“You want the music to speak for itself, you don't want to use the music gratuitously, especially with those kind of videos [of atrocities],” she says, but by that same token, “You do want to shock people; because genocide is shocking.”

Garapedian was able to use the music of System of a Down as an effective thematic bridge to the topic because as she puts it, “That's what their music is about; it's very in your face.”

Screamers makes it clear that the way to catalyze action against genocide is by speaking out, hence becoming screamers ourselves, using the voice we all have to spread the message. Garapedian sees speaking out as vital for reform. She states, “I think part of political action is about believing that you can make a difference; you've got to rattle the cages here.”

With the cutting of foreign bureau budgets on network television and lack of governmental action, the onus is on regular people to call attention to these crises more than ever. Garapedian remarks, “We have to make genocide something that is compelling to act on now, it has to be something that feels so compelling that we have to act; the same way as a natural disaster or a famine.”

After all, what's the alternative?

Screamers is currently in select theaters.