Gong Li: After a Turn in Miami Vice, the Actress Returns to Chinese Cinema 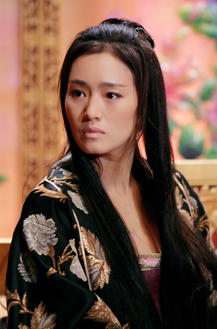 Curse of the Golden Flower , directed by Zhang Yimou ( Hero , House of Flying Daggers ), takes place over 1,000 years in the past, during the rule of China's Later Tang Dynasty. Historically considered to be one of the more ostentatious and capricious regimes, the storyline picks up at the gates of the Imperial Palace, as the Emperor (Chow Yun Fat) returns from battlefront – where he's been staving off the Mongolian hordes – ostensibly to celebrate the annual Chong Yang (chrysanthemum) Festival.

Soon, however, it's apparent that the relationship between the Emperor and the Empress (Gong Li) is beyond strained; and then there are all of the family secrets. It quickly becomes clear that everyone has a skeleton in their closet and there's a Byzantine thread of deception and darkness found between the lines of everything said and done.

Curse of the Golden Flower is a film lover's flick as it is told with both visual and verbal beauty. Gong Li, who has worked with Zhang Yimou since he made his directorial debut with the film Red Sorghum (which was also the actress' maiden film) garnered the Golden Bear Award at that year's Berlin Film Festival nearly two decades ago. According to Yimou, casting Gong Li in the role of the empress in Curse was a no-brainer – he had the actress in mind from the start.

“I really couldn't think of anyone else I would rather have,” Yimou says point-blank, adding, “I was very lucky that when I called [Gong and co-star Chow Yun Fat], they both agreed to participate in this production – we had our two leads.”

In addition to working in over eight productions directed by Yimou (with whom she was romantically involved for several years), Li has also worked with a prolific list of Chinese directors that includes Wong Kar-Wai, Sun Zhou, Xi Xianran and Chen Kaige. In 1993, Farewell My Concubine , directed by Kaige, won the Palm d'Or at Cannes. All of this brings us back to Curse of the Golden Flower .

As the film's storyline holds, the Empress – who is the Emperor's second wife – despite her ailing health, has been involved with her stepson, Prince Wan (Liu Ye), who, in turn, has been having trysts with a courtesan himself. As all of this unfolds, Prince Jai, the second son who's been on the frontlines with his father for years, is pulled in two directions as riddles unfold and he must decide whether to stay faithful to his mother or to his exalted father-who's also been brewing plans of his own.

To delve any deeper would ruin the viewing experience, so the only thing that will be said is that director Yimou keeps things rolling with a couple of wiggy subplots and twists. The Crown Prince's tale is especially exquisite to discover, as well as, off-the-chain battle sequences with 1,000's of armored warriors in the royal courtyard and mysterious ninjas, too. It's an expansive tale that points to a far-off time and place that's simultaneously dark yet full of brilliance; unimaginable, yet oh so familiar.

Often called China's Greta Garbo because of her stunning beauty and acting range, Li has earned international acclaim for her efforts onscreen in films like The Story of Qui Jou (Best Actress, Venice Film Festival, 1992), Breaking the Silence (Best Actress, Montreal Film Festival, 2000) and, more recently, Memoirs of a Geisha , which was also Li's American film debut. In Curse , although there are a couple of intense action scenarios, the main thrust of this film's story is fueled by undiluted drama which makes one wonder how Li kept the Empress' dramatic intensity throughout the shoot.

“For me the process was kind of like being in a bullfight,” the actress begins, speaking through an interpreter, “where they stick the bull and keep taunting and exciting the bull until he's just in a frenzy and he's ready to fight. For me it was like that every day.

“I'd get all excited and the director, of course, was the bullfighter and I was the bull, to get me really charged up to perform in the play and then after we'd finish it I'd get off work and go home and have a nice sleep. The next day [I would] get up and start the whole process over again.”

Zhao Xiading, the film's cinematographer, has an eye for crisp shots and goes beyond the norm in Curse , resulting in the addition of a uniquely stylized texture to everything that the camera lenses capture in the film. The usage of vivid yellows, reds, blues and greens in palace corridors and royal courtyard help encapsulate all of the pageantry and flourish of a time that's been chronicled in ancient folklore and silk screens but never on film.

“Color is indeed very important in the scope of this film,” says the director. “Especially gold colors and jade colors and you see that very prominently displayed throughout the visual scheme of the work. This comes from a saying we have in China where gold and jade are on the outside while the inside is dark and rotting. And that's the theme we really wanted to emphasize here. Although we have this splendid exterior packaging, what's going on inside is very different and very dark.”

Set during the Later Tang Dynasty with a cast portraying one of China's more flamboyant royal lines not only called for a palatial setting, but also needed was a wardrobe consistent with the era. This was expedited by the talents of veteran costume designer Yee Chung Man and resulted in the creation of the Empress' ornate, Phoenix gown – a dress that one couldn't just slip into.

“The whole process of getting ready [every day], including hair and makeup and costume, took maybe about three hours total,” Li recollects. “By the time I got to the hair stage I finally began to feel ready and like an empress – the bullfight was ready. By the time we got onto the set with the color scheme and everything is very red and gold and splendid, [everything] really took off after that.”

Now that she's worked for directors in both her homeland and the U.S., most recently starring in Michael Mann's Miami Vice opposite Colin Farrell and Jamie Foxx, the actress reveals a preference for shooting period films in China. Still, according to Li, her inner perfectionist unveils a revelation and points to the seriousness with which she approaches her artistic craft as a thespian.

“Going back to film Curse of the Golden Flower , we did it very smoothly and efficiently so it was a very good experience and we were very happy with it. Actually I feel a little unsatisfied in Curse of the Golden Flower [with] my own part in the film,” she reveals, concluding, “I wish it were longer. I wish they would [have given] me another 20 to 30 minutes [so] I could actually do an even better job with the performance.”