Academy of the Serras: The Nation's First Weight-Loss Boarding School 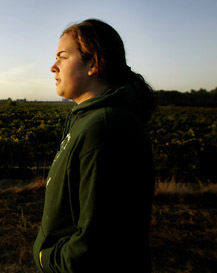 Over breakfast of Cheerios and skim milk, Melissa Riggs and her friends debate the value of their chewable chocolate vitamins. At 25 calories and a 1?2 gram of fat, are they really worth it?

Such talk is common at the Academy of the Sierras, the nation's first weight-loss boarding school. It's the temporary home to 80 boys and girls who wage a battle against excess pounds and the pain that put them there.

Students like Riggs, 17, move to the sparsely populated farmland outside Fresno to be isolated from their families, friends and unhealthy triggers. In 15 weeks, Riggs has lost 54 pounds.

At 213, she wants to lose 70 more pounds. She plans to stay through January and then finish her senior year at Woodbridge High in Irvine, Calif.

“I want to get healthy, and I'm working really hard,” Riggs says after getting up at 6:45 a.m. for the daily two-mile walk on the dusty roads surrounding the school. “Sometimes I'm really not motivated, and I don't want to get up. ... By the end of the day, I'm glad I didn't sleep in.”

With one in five American teenagers considered overweight, a growing segment of the $50 billion weight-loss industry is focused on childhood obesity. While there are dozens of therapeutic boarding schools for behavior problems, the academy is the first devoted to weight loss.

Students take classes in nutrition, cooking and fitness plus typical high school subjects. They exercise about three hours a day and receive at least four hours a week of individual and group therapy. The average stay is nine months.

“Is this a safer version of the real world? Absolutely,” says the school's executive director, Phil Obbard, who previously worked for Slim-Fast and has a history degree from Yale University. “Weight loss is that catalyst for behavioral change and emotional growth. We couldn't do what we do if it weren't in this enclosed, safe environment.”

School officials report that 15 students who stayed for the 2004-05 school year on average maintained their weight loss for at least 10 months after leaving. Longer-term results are expected next year.

The program depends on a strict system that gives students privileges for good behavior.

As a baby, Riggs grew at a fast rate and stayed overweight through childhood. She says she used food to deal with a strained relationship with her dad and the stress of changing schools.

At Woodbridge, Riggs was on the swim and water polo teams and performed with a dance chorus. Still, she couldn't shake the weight.

Riggs reluctantly agreed to go to the boarding school in June after her mom suggested it. She wasn't sure it would be any different from her other attempts at dieting.

Now she loves seeing the difference in her face and stomach. She looks forward to compliments for something other than her blue eyes.

For her mother, Leslie Riggs, the result is miraculous.

“She kind of had given up on the idea of losing weight,” she says. “The turnaround in her personality and her outlook is worth every penny.”

While Melissa is away, her mom and sister Stephanie are following a similar diet and exercise plan. Melissa fears gaining weight at home, but feels ready to face any temptations.

“I train myself to think that unhealthy food is bad for me so when I pass McDonald's or Carl's Jr. I don't want to eat it anymore.”

Distributed by McClatchy-Tribune Information Services
Article posted on 12/11/2006
This article has been viewed 3136 times.