A Static Lullaby: Nov. 29 @ the Troubadour 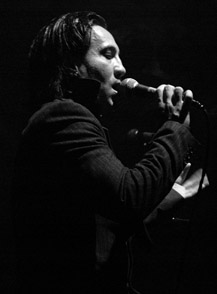 Some bands will spend their entire existence treading water, trying to stay afloat amongst countless numbers of other bands doing the same thing, others will catch a break, and succeed early on. For the members of A Static Lullaby, it's been a continuous uphill battle.

After releasing its debut album, …And Don't Forget to Breathe in 2003, the screamo/post-hardcore band was hailed by some as the next “band to watch,” but things didn't pan out the way they had hoped. Its sophomore album, Faso Latido, was a huge upset for the band – being dropped from Columbia Records and later, losing more than half of the members of the group.

I am Ghost on the other hand only played a handful of shows before inking a deal with Epitaph Records.

Concluding their national tour together with a performance at the Troubadour, both bands gave it their all, however it was I am Ghost that left the lasting impression by the end of the night.

In just a short amount of time – I am Ghost released their debut EP, We Are Always Searching , just last year – the Long Beach natives have gone from just another AFI, My Chemical Romance-type band to one that's steadily garnering new fans across the globe.

The band's new album, Lover's Requiem , is leaps and bounds better than its debut. They've taken their goth-punk persona to the next level, improving in virtually every aspect as a band. Vocally, instrumentally and lyrically, I am Ghost has managed to find its own unique sound.

On stage, with the help of theatrics, the group performs with ferocity, and despite its members' young ages, has the stage presence of a band that's been around for years.

Headliners A Static Lullaby on the other hand, prefer a stripped down, raw intensity to their performance. Though its recent self-titled release sees the band coming back into its own with a great amount of potential, the members just don't come alive onstage as much as they could.

Although its albums show great versatility and solid talent, onstage the band relies too heavily on screaming, when it's the melody of singer Dan Arnold that shines most. If these guys could add more variation to their set they just may be able finally get the credibility they deserve.