Game On: Brash Brit is Playing it Her Way 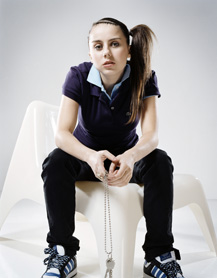 Apparently Lady Sovereign walks it like she talks it. The English rapper opens her hilarious, gregarious debut album with “9 to 5,” a song about waking up after a night of partying and having to report to a round of media interrogations and photo shoots. In her foggy state, the track-suit-loving tomboy winds up “in FHM posing in a bikini next to a Lamborghini/Next up the theme tune for tweenies.”

In the early afternoon just before the release of Public Warning , the woman born Louise Harman 20 years ago begins a day of interviews with a confession:

“I'm still drunk from last night,” she says. “I'm trying to hang in there.”

Unlike in the comic song, in conversation Sov firmly stands up for herself (despite a tendency to forget what she is saying). “I like to make points about everything in music that I need to say,” she says with unapologetic bluntness. “Whatever's in my brain, whatever I feel like talking about, I just let people know.”

In a world of champagne-swigging high-rollers and pimp-goblet-clutching strip-bar fans, Sov is a pint-chugging (and pint-sized), pub-going chick-next-door. That's precisely her appeal – well, that and her irreverent wit and dope beats. She may have been signed by the kingpin of American hip hop (Jay-Z), but mi'lady built her reputation by spitting trash at power, and spreading the spit via her self-tended MySpace page.

Like a hip-hop Sex Pistols, the product of North London housing estates – the English equivalent of ghetto projects – reps for working stiffs and the underclass. Unlike so many of her American contemporaries, she does not rap about hot rides bought after dealing cocaine.

That doesn't mean she's not full of braggadocio. Lady Sovereign does not have self-esteem issues. “My prevalence means more than your irrelevance,” she raps on the CD's rapid-fire, almost punk-rock title track. “I got a habit of absolutely damaging any track when I attack.”

Hearing a woman shouting “attack” over raw, wicked beats feels like the return of early '90s revolution girl style. Except unlike media-shy, underground riot grrrls, Sov has ruled the chart on MTV's popular teen program “Total Request Live.” “Love Me or Hate Me” is being used in the ad campaign for the Chocolate mobile phone and has been featured on shows including “Ugly Betty” and “The O.C.”

Pretty remarkable for a woman who repeatedly mocks the glamorous mode that has seemingly become a requirement for female stardom. Sov raps repeatedly about her love of baggy clothes. She would never wind up in a bikini in lads' mag FHM .

“I couldn't do it,” she says. “It's not me at all. People know that I will not go there. They've never asked. And they're not going to bother asking because it's not happening.”

Sovereign came up in the fertile club scene of English hip hop, or grime, which seemingly every year tries to export one talent across the pond: Dizzee Rascal, the Streets, M.I.A. With her clear diction and funny rhymes, Sov has the most stateside commercial potential of these acts yet – although it's unclear how a rapper who throws about so much British slang will dent the heartland or the hood.

But Sov has also earned the respect of much of the “backpacker” crowd, indie-rock-style lovers of hip-hop dedicated to craft, not image. She shares that scene's disregard for today's commercial sound; she says she listens mostly to old hip hop, like Audio Two and EPMD.

Lady Sovereign's outsider take on the American art of hip hop is a breath of fresh air – or at least a beer-laden belch. As she puts it, with trademark puerile, juvenile glee on “Public Warning”: “I don't wanna play none of your games, I wanna play all of my games.”