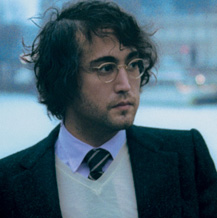 If we had Shakespeare around to write about Sean Lennon, he might call the play “Henry IV 1?2.”

Shakespeare's “Henry IV” (Parts I and II) and “Henry V” explored the progression of a spoiled, partying, bad-boy prince into a courageous, inspiring King. Sean Lennon, son of John, seems to be trapped somewhere between the slacker prince and the heir to his father's musical throne.

For years, the youngest Lennon (he is 31; Julian Lennon is his older half-brother) has been known more for his celebrity romances – with Mick Jagger's daughter Elizabeth, actresses Bijou Phillips and Lindsay Lohan – than for his actual work. He had come to be viewed as a musical underachiever, wasting away whatever talent he might have been harboring.

Now, eight years after his promising first album, he has finally released his second full-length, Friendly Fire . Here, Lennon sings in a relaxed voice about love and loss over pleasing pop music that has, at times, Beatles-esque melodies and arrangements.

It comes with a second disc, a DVD with extravagant music videos produced by his mother, the artist Yoko Ono, and featuring Lohan, Phillips, Carrie Fisher and other familiar actors. He calls the combined videos “an art film.”

During a recent phone interview, Lennon sounded like a reluctant royal, committed to making pop music but not terribly comfortable as a celebrity – or, as he puts it, a “cultural phenomenon.” His voice is gentle and lilting, though the tone of his brief answers ranged between languidly tight-lipped and sharply guarded.

Well, it's been long time no music. Why so long?

I always write songs. I didn't want to deal with the superficial aspects of promoting myself and all that crap.

Exactly what I'm doing now. I've come to a point in my life where I realize I shouldn't fight the inevitable. One must accept reality.

What was it like to work with your mother on the videos?

She produced them. She advised me on business and technical decisions; she's a great filmmaker.

You're the son of John Lennon and Yoko Ono – do you ever feel like you should just get away from all the pressure of being a musician and be a lawyer or something?

If I thought that would relieve the pressure maybe I would, but I don't see any release ... from being this cultural phenomenon.

What are your favorite memories of your father, as a musician and as a father?

I don't like talking about that. It's a bit too precious to give it away too easily.

How about your favorite Beatles song?

Just about every other pop musician in your generation has been influenced by the Beatles. Is it fair for you to be?

Is it fair? I don't think fair has anything to do with it. As a musician you're influenced by people doing good music before you, whether it's Beethoven or Bob Dylan or Elvis ...

How could you not be influenced by the Beatles if you write songs? If you make anything as an artist you have to study the masters or else there's no point.

What were you wanting Friendly Fire to be – a pop record? A dance record?

Not really a dance record, more like a take-a-bath record. Expectations are the root of all disappointment.

Are you happy with how it's been received?

I think my satisfaction is found more in the process of making music than societal recognition.

Interviews
Billie Eilish isn’t stressing over the Grammys. She’s busy worrying about the end of the world
800 views

Interviews
Jade Jackson may be the next big country-rock star. But first, she has some tables to wait
1,047 views

Interviews
YG was ready to drop a new album. Then his friend Nipsey Hussle died
834 views

Interviews
For Vampire Weekend, East Coast prep is out, and L.A. dad vibes are in
780 views