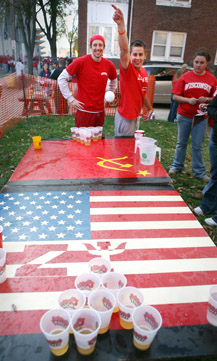 Beer pong – in which players make their opponents drink by sinking a ping pong ball in one of their cups – has been around for more than a decade. But in the last couple of years, it has reached unprecedented popularity – to the chagrin of college administrators who fear the game fuels binge drinking.

Students say that it's rare to attend a party where the game is not being played. There's a distinct beer pong culture, complete with tournaments, posters and custom-made tables.

“It has exploded,” says Nick, a UW-Madison junior, as he stood over a table that had taken him weeks to make, a ping pong ball in one hand, a beer in the other. “We play from dusk to dawn.”

Drinking games are not new to college campuses.

For years, students have taken part in quarters, a game in which a player can make others drink by bouncing a quarter into a cup, and a card game with a distinct hierarchy, in which the person at the bottom, known as an expletive, can be ordered to drink.

Also common have been a variety of games requiring players to consume alcohol out of the long, gangly tubes of beer bongs.

What distinguishes beer pong from these drinking game staples is how competitive it is. It's not just a vehicle for getting drunk; it requires skill.

Or so beer pong enthusiasts would have you believe.

“It's like a sport that involves alcohol,” says Patrick, a junior at UW-Milwaukee, who says he had worked hard to perfect the arc of his ping pong tosses and his bounce shot.

Patrick, who began dabbling in the game last year, is now a self-proclaimed addict.

He and his four roommates engage in weekly beer pong tournaments against their next-door neighbors. The winner gets a plastic gold belt like those found in World Wrestling Entertainment matches that says “World Champion.”

When they don't have ping pong tables, players will make their own, often taking the time to apply lacquer (to avoid warping) or paint images. Others remove doors from their hinges.

“It's a big problem,” says Mike, a UW-Madison junior, who works maintenance in his apartment building to help pay the bills. “They have a hard time putting the doors back on. They're really sticky from beer.”

Researchers who study drinking games say they can cause serious problems, contributing to binge drinking and the negative consequences, such as drunken driving, that go along with it. One study of college students found that nearly half the male respondents who played drinking games said they did so to facilitate romantic interactions and sexual encounters.

“We're trying to emphasize, especially to freshmen, the dangers of drinking games,” says Paul Dupont, a psychologist at UW-Milwaukee's student health center, who leads the university's Task Force on Alcohol and Alcohol-Related Issues.

Beer pong advocates interviewed for this story conceded that while it is often not the intention, the game can cause them to get severely intoxicated. Not only must they drink the beer contained in a cup in which the ball lands, losers also are required to, at the end of the game, finish the beer remaining in the cups of the winners.

Alex, the freshman at Marquette, is among the female students who dislike beer pong for reasons of hygiene. She is convinced the ping pong balls are covered with germs and would prefer that they not make it into her beer.

And although Mike, of UW-Madison, enjoys playing the game when he's hanging out with friends, he has become frustrated by how much it dominates parties.

“It's really anti-social,” he says. “You go to a party, and no one is talking. They're just sitting around watching the game.”

Campus News
‘Adulting’ is hard. UC Berkeley has a class for that
530 views