Gastronomy U: Program Trains Students to Work With Consumers and Producers 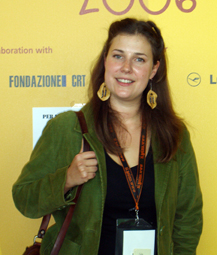 The University of Gastronomic Science's mission is to train epicures, and Allison Radecki of Montclair, N.J., will be one of its first graduates.

When she learned that the organization she worked for called Slow Food, in conjunction with the regional authorities of Piedmont and Emilia-Romagna, planned to open a private university dedicated to gastronomy, she knew she had to go.

So Radecki, 31, left everything she knew in the States behind, including her fiance and her job as office manager at Slow Food USA in New York. She committed herself to a three-year undergraduate program at the University of Gastronomic Sciences here. When she joined the university's inaugural class two years ago as one of just 70 students, she spoke “a little” Italian, she says, because she had worked for a year in Genoa.

She'll graduate next summer or fall, she says. The program is still evolving, and the university hasn't decided when they'll finish.

The university is the first of its type in the world, says Carla Ranicki, the school's communications director, as she led a group of visitors around the school. Other schools offer gastronomy-related courses but their programs are typically more directed to producing food writers and journalists. This program, Ranicki says, is the only one that trains graduates to work with producers or consumers.

The university is one of four organizations under the aegis of the Agenzia di Pollenzo; the agency also oversees a wine bank of 180,000 bottles, a hotel called the Albergo dell'Agenzia and a world-famous restaurant, Guido.

If the lush fields and Alpine foothills surrounding the village seem an unlikely – if beautiful – place to locate a university, it will help to understand that Pollenzo is within virtual shouting distance of the city of Bra, where the Slow Food movement was born under the leadership of Carlo Petrini.

But the university is not a cooking school; graduates aren't trained as chefs. Instead, they take classes like “Sensory Analysis 1: Elements of Consumer Science with Practical Work,” “History of Food 1” and “History of Cuisine and Gastronomy.” They also study botany, microbiology, zoology, viticulture, chemistry, economics and statistics.

About half the courses are taught in Italian, Radecki says; the rest are in English. First-year students get intensive language instruction but, as she says, “Can you imagine trying to learn microbiology in Italian? I would have a hard time with that in English!”

Students also do practical hands-on studies, called “stages.” Stages are either a survey of a region, such as Tuscany, Ireland or Japan, or thematic, such as artisan pastry, sustainable fishing, cheese or industrial confectionery. Each stage lasts two weeks.

This will be Radecki's second undergraduate degree; she holds a bachelor's degree in sociology and theater from Wesleyan University in Middletown, Conn. She says the program is worth the nearly $25,000 it costs each year (tuition includes meals, housing, books, a laptop computer and more), but that she doesn't plan to continue with either of the two specialized master's degree programs.

“When I came, I thought I'd like to live in Italy and work here,” Radecki says. “But now, I think I might like to go back to the States. I'd like to use my writing skills to communicate the stories behind the food, to work for a business or venture that uses food to build community. There's such a need for that in the U.S.”

With the tools and understanding that Radecki has gained in her three years in Pollenzo, she'll be well qualified to lend a hand.