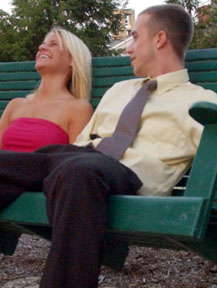 Lying on the hood of the Humvee he used as his bed for much of the war, Brandon Nordhoff would put on his earphones, turn up the volume on his Discman to drown out battlefield noises, and imagine himself at a party back on the Indiana University campus.

After one such dream, Nordhoff determined when he returned to campus, he would pledge a fraternity and make up for the social life he lost while deployed with his Indianapolis-based Marine reserve unit.

He has made up for lost time with his social life, but for Nordhoff and many of the thousands of Iraq war veterans, the transition from war zone to campus has not gone smoothly. They acknowledge they struggle to mend war wounds, mental and physical, while trying to readjust to the relative triviality of life as a student.

As the oldest pledge in this year’s Acacia fraternity class, Nordhoff, 21, often feels awkward. Partying while many of his Marine buddies are still in Iraq now seems frivolous. And the occasional war protest on campus can make him furious.

"Going to war changes you," said the corporal, a junior from Kirksville, Ind., a small farming community near Bloomington. "I feel 200 percent different than the people in Bloomington and a lot of the kids at the university."

In the first few weeks of the school year, Veterans Affairs officers at campuses throughout the Midwest have reported being inundated with soldier-students looking for help collecting their education benefits under the Montgomery GI Bill.

The officers can help them straighten out their benefits, but universities have no one designated to help the soldiers with the transition from battlefield to classroom.

Although the Iraq war has not generated the unrest on campuses the Vietnam War brought in the 1960s and 1970s, divided opinion on the current conflict is obvious. Some returning soldiers complain their classmates and professors often have a shallow view of the war and they do not show enough support for the troops.

"Inevitably in classes, you have these kids who criticize the war and criticize the president and don’t know what they’re talking about," said Cpl. Daniel Rhodes, a Marine reservist from La Grange, Ill., and a senior in political science at the University of Illinois in Champaign. "I want to say to them, ‘Do you realize that you’re sitting here in a classroom, living freely, because we’re willing to fight?’"

Other veterans have returned to campus with doubts about the necessity of the war in Iraq. From lectures in his Chinese history class about how emperors sold war to their people, to a local business’ toy-soldier display representing Americans who have died in combat, Bradley Rehak, a senior at the University of Iowa, said he is constantly reminded of the war.

"We can say that we got rid of a terrible dictator by going to war," said Rehak, 24, a medic with the Iowa National Guard. "The argument misses the far greater points that we haven’t found that Saddam Hussein had weapons of mass destruction and we haven’t found links between al-Qaida and Iraq."

Steve Asche, 24, another student at Illinois and a veteran of the Iraq war, echoes many of the criticisms from war opponents on his campus – the astronomical cost to fight, the loss of American and Iraqi lives and what he sees as questionable planning by the architects of the war. Still, it angers him when he sees classmates make sweeping criticisms of the war, which he said belittle the sacrifice he and other soldiers made.

Earlier this semester, the student newspaper published two stories on its front page about vigils held on campus for victims of the attack against Beslan’s School No. 1 in Russia and for the more than 1,000 U.S. soldiers who have died in Iraq. The story on the Beslan vigil was given more prominent display, which Asche found to be an affront to soldiers who had died in the war.

"I don’t mind if people are against the war and want to speak out against the war, but I don’t like it when they don’t support the soldiers," said Asche, a civil engineering major carrying 27 credit hours this semester to complete his degree.

Since returning to campus last spring, Asche, who served south of Baghdad, Iraq, with the Illinois National Guard’s 333rd Military Police unit, said at times he has been consumed by feelings of bitterness and frustration.

About three months after arriving in Iraq, Asche was badly burned in an explosion. During a chase of an Iraqi vehicle that raced through a U.S. checkpoint, a Humvee crashed into the one Asche was riding in. He spent several days in a drug-induced coma after being airlifted to a military hospital in Germany.

At 6-foot-4 with a football player build, Asche looks the picture of health and youth. But his hands, repaired by skin grafts, are as wrinkled and leathery as an elderly man’s.

"I just want to be over with it," the former sergeant said of college.

Barry Romo, national coordinator for Vietnam Veterans Against the War, recalled perhaps the most turbulent, emotional time in his life was when he returned to campus in San Bernardino, Calif., after serving in Vietnam in the late 1960s. It was difficult to relate to classmates who had not served in Vietnam, Romo said.

Rhodes, 23, who was a junior when he left for Iraq, said he has grown disillusioned by campus life. After war, Rhodes explained, most of what is taught in the classroom seems unimportant.

Over the summer, Rhodes completed Officer Candidates School at Quantico, Va., and as soon as he graduates, he will go on active duty as a second lieutenant. He is taking Arabic, Hebrew and Spanish this semester because he thinks the languages might come in handy in future military operations.

Before heading to Iraq, he was an underachieving student scraping by with a 2.0 grade-point average who spent more time at the campus bars than in the library. Since coming back to school, he has regimented his lifestyle and dramatically raised his grades.

Rhodes has shut himself off from campus life in part, he said, because most of his civilian classmates would not understand things about his war experience, and they would shun him if he tried to explain.

While Rhodes said the war experience helped him mature, Nordhoff said his time in Iraq made him long for Bloomington’s parties and bar scene. In phone calls and e-mail, his friends on campus asked him whether he was safe and how he was coping. He replied with questions about parties, the bars they were frequenting and who was dating whom.

For all his anticipation about returning to a normal college life, things have not turned out as he expected.

Though he is certain the Iraqis are better off now that Saddam Hussein has been overthrown, Nordhoff said he is disappointed President Bush has not spelled out an exit strategy. A staunch Republican, he vowed to sit out this election rather than vote against the president.