Lock and Load: With Gifts for Gamers 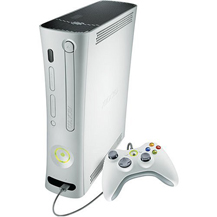 If you think a Wii is something to take after you've had too much to drink, you probably need this list of video-game gift ideas. Just look below for the brand of system that your favorite gamer has, and you'll find recommendations that are sure to please. XBOX 360

The first-person shooter “Gears of War” is the must-have title for Xbox 360 players this season. On the other end of the spectrum is the fun-for-all-ages “Viva Pinata.”

Also, consider giving a subscription to the Xbox Live online service for a month to a year ($8 to $50) with a gift card available in many stores.

The shooter “Resistance: Fall of Man” is like a cross between “Halo” and “Resident Evil,” and your gamer will be dying to play it. The tried-and-true racing game “Ridge Racer 7” or the fantasy adventure “Untold Legends: Dark Kingdom” are fine, too.

Really, though, if your gamer has a hard-to-find PS3, he or she could probably use a gift card to buy accessories, such as better video cables and an extra controller, or to pick out a game.

The essential game for Nintendo's new system is the adventurous “The Legend of Zelda: Twilight Princess” – you won't see your gamer for hours, maybe days, with that gift.

Also, try the racer “Excite Truck” or the goofy “Super Monkey Ball Banana Blitz” or “Rayman: Raving Rabbids.” For the same reasons as the PS3, a gift card would be a good option.

A few decades later, and Mario still rules at Nintendo, with “New Super Mario Bros.” being a sure bet for the portable DS. Also try some highly addictive titles, such as the grooves of “Elite Beat Squad,” the classic puzzler “Tetris DS,” the thinker “Brain Age” and this year's “Nintendogs”-like entry, “Dalmatian & Friends.”

“Tekken: Dark Resurrection” has been called the game of the year for the handheld PSP, so it recommends itself for fighting-game fans. Mature gamers will go for “Grand Theft Auto: Vice City Stories,” while all will like the wacky musical action of “Gitaroo Man Lives!” and the throwback “EA Replay,” with 14 EA games big in the early '90s, such as “Desert Strike” and “Road Rash” – a steal at $20.

The biggest game system isn't going anywhere thanks to a bevy of great new games. The music-driven “Guitar Hero II” and “Dance Dance Revolution Supernova” will keep the whole family moving to the beat.

The fun “Dance Dance Revolution Ultramix 4” will find its groove with Xbox fans, as will the theme-park simulator “Thrillville.” Mature players will go for “Scarface: The World Is Yours” and the B-movie-inspired “Destroy All Humans 2.”

This season represents the last gasp for Nintendo's old console, but it's going out with a blast: its version of “The Legend of Zelda: Twilight Princess.” Also try “Happy Feet,” based on the hit movie, and “Bionicle Heroes.”

FOR ALL (OR MOST) SYSTEMS

Other good games available for most systems include the racer “Need for Speed: Carbon,” the superheroic “Marvel: Ultimate Alliance,” the popular “LEGO Star Wars II” and the shooter “Call of Duty 3.”

Distributed by McClatchy-Tribune Information Services
Article posted on 12/12/2006
This article has been viewed 2557 times.