L.A. Bands to Watch For: Keep Your Eyes on These Pretty Babies 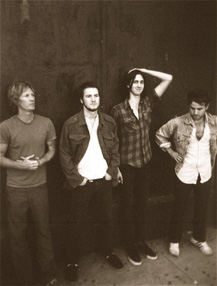 Scene points are very hard to come by in Los Angeles. You either have to be at all the hot shows, know who Peter Bjorn and John are when the topic comes across at a barbecue or rummage through your grandparents house, trying to find your grandpa's old ginger coat.

Sadly we at Campus Circle love our coats, so we give you, the persistent scenester, the musical advantage this upcoming 2007 by offering up the top L.A. bands to watch out for. That's 10 points right there. You can thank us later.

The zombies always rise from the dead in the popular late night horror films directed by auteur George Romero. In 2007, a lush drone, hypnotic vocals and evocative lyrics will rise in the musical form of Midnight Movies and their March release Lion The Girl .

The additions of drummer Sandra Vu and bassist Ryan Wood have made the band a furious foursome, a more mature sound has been developed all the while keeping to the bands minimalist approach. Live, the band is able to capture that lasting effect on stage.

Even though singer Gena Olivier has traded in her drum kit and moved up in front to her keyboard, her polarizing effect on an audience is still profound. Quite simply, she's a star.

They say hype is a powerful thing. One minute you're the toast of the town, the next minute you're in the two-dollar bargain bin at your local record store.

Luckily for Cold War Kids, their Robbers & Cowards CD won't be in that bin anytime soon. And if I may, spin around a certain Public Enemy song, do believe the hype.

The band's jangle rock of thunderous bass lines and frenzied piano entwine ever so nicely with Nathan Wilett's bellowing voice. The proof is in the fan favorite “Hang Me Up To Dry,” already a blogger anthem and soon to be your personal pick to tell all your friends.For more information, visit www.coldwarkids.com.

In 2006, the world of indie rock saw a parade of them, got a good look at their pair of eyes and witnessed the mother of them all. 2007 brings about the latest musical incarnation of the wolf, this time the frenzied beast shall emerge from the shallow waters of L.A.

Sea Wolf having already done the prerequisites of being an up-and-coming L.A. act (playing a month-long residency at Spaceland, among other criteria), looks to bring their own blend of melancholic pop to the masses. The band, which consists of Alex Brown Church and a plethora of players, is ready to play and very hungry, hungry like the wolf.

It's thrash so beautiful, so intestinally raw, that it was plucked by the record label Kill Rock Stars   – home to indie rock heroes Deerhoof. Garbled lyrics only add to the charm created by the five riotous girls whose wholesome names of Jessie, Jenna, Katelyn, Jennifer and Michelle are thrown aside in favor of Mika Miko.

You'll probably get thrown around a bit if you happen to catch them at a live gig. The band has declared its love of playing shows. Catch them and get hit by the musical equivalent of a thrown brick to the face.

There is no one named Simon Dawes in the band Simon Dawes. If a Mr. Dawes did exist, he'd be proud to know that his namesake is being honored by equal amounts of sheer, power pop mixed with a slight whim of breeziness – something akin to the group's home residence of Malibu.

Iconoclasts in the making, the band has followed the musical mantra that exuded out of such pop luminaries as the Kinks. The group's Carnivore would make the brothers Davies proud. Especially the bar room chug of “Lazy Daisy” that is complete with overlapping noises and muttered vocals. It's quite spectacular, knowing that members of the band have not yet turned 21.

The Parson Red Heads are newly dubbed Angelinos, the group having moved from the rain of Portland to the glow of L.A. That newfound sheen must've had an effect as the slaphappy six bring a much-needed blend of lo-fi pop and lush '60s psychedelic.

The four part harmonies, hand claps and tambourine rhythms are the high point of the band, but it's the sparse dreamlike numbers that show a different side, giving the group a distinct edge amongst many of its peers.

It's the DIY philosophy done right. As the great get greater, the success only trickles in. Look no further than rock outfit Great Northern who quite simply, just played.

And play they did. Results of which led to their self-made EP and in May, 2007, the band's debut LP.

In trying to achieve this DIY philosophy you have to do at least one thing: you have to be good at what you do. Ushering in lush vocals, sweeping piano and a true pop steadfastness, the band achieves a genuine sound. They're very good.

Even if Lavender Diamond, a pop rock/folk rock/psychedelic outfit suggests that maybe it's you that should slow down, it might be best to remind them to take a breather.

The band has gone through a whirlwind – being signed by Rough Trade Records for distribution overseas, their EP The Calvary of Light will be re-released in January and best of all a new record will be out in the spring. That quick breeze that has occurred around the band can also be used to describe their music.

A collection of strings, bells, whistles and tints of whimsical piano enhance the centerpiece of the band: the flying fancy of Becky Start's beautiful flutter of a vocal.

A product of the Silverlake and Echo Park music scene, the Broken West has shown the musical potential to rival some of their neighboring counterparts. The influences are there, from the Kinks to Spoon but what sets them over the top are those golden melodies akin to only that of the illustrious Beach Boys.

Backed by record label Merge Records, the band looks to conquer America in 2007; with their January release of I Can't Go On, I'll Go On and a musical trek around, you guessed right, the Wild West.

The Broken West will perform every Monday in January at Spaceland, in Silver Lake. For more information, visit www.thebrokenwest.com.

Coming from divergent areas of the U.S. and landing smack dab in L.A. is the Deadly Syndrome. Only just over 10 shows in the books as a group, the Deadly Syndrome could be considered fresh meat amongst the long list of on the brink bands in the city.

Don't be fooled, however, as the band's sound is a genre buster – proliferating a little bit of indie pop here, and some folk rock there. With a lead singer known only as Crash, the band is the remedy for all your pop blues even if the moniker would say otherwise.

The band can also brag that it has indie cred with the ghost world as on stage the members are accompanied by their ghostly friend. Not Casper, but rather, Mustachio.