Ready or Not: Recommended Bowl Viewing 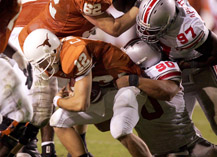 Bowl season began Dec. 19 with TCU and Northern Illinois playing in the Poinsettia Bowl in San Diego, and it's hard not to cry for Arizona and Washington State.

Both of these football teams reached the pinnacle of success as determined by the NCAA and ESPN by reaching six wins, finishing with a fine record of 6-6. But the Wildcats and Cougars will be home for the holidays. Considering that Iowa (6-6) lost five of its final six games to earn a berth in the Alamo Bowl, perhaps they have an argument.

It also means that in some back room at ESPN, staff members are thinking of ways to entice some city to add yet another bowl game to the already turkey-stuffed schedule.

Certainly, another two or three bowls could be added to the schedule.

Of course, there might be fans who believe the bowl system is incredibly watered down with frauds. But for better or worse, here is a look at this season's bowls.

A USC-Ohio State game would have been more fun, but this game should be intriguing. Unfortunately, it probably won't be as good as the Michigan-Ohio State regular season finale, which turned into an offensive free-for-all with the Buckeyes winning, 42-39.

Florida's defense is too good for that scenario. Heisman Trophy winner Troy Smith will be operating against the No. 10-ranked defense in the nation. Gators coach Urban Meyer is certain to trot out some surprises.

The Wolverines haven't faced a defense like the Trojans', so don't be surprised if this one gets out of hand in USC's favor. In a playoff, both teams would have had a shot at winning it all.

Say what you want about whether Boise State deserves to be in a BCS bowl, but the Broncos are interesting to watch. Boise State tailback Ian Johnson punishes defenders on the field and knits hats off it.

The Sooners will get back tailback Adrian Peterson, and the NFL will be watching. You should, too.

It's bowl season, which means it's time for the Irish to take their annual beating. It's eight straight losses and probably will be nine after this one.

Lots of fun stuff, though. Irish quarterback Brady Quinn will be performing his NFL audition against the nation's No. 2-ranked defense. Tigers quarterback JaMarcus Russell is a playmaker who usually is worth the price of admission.

All eyes will be on JoePeg limping along the sideline, but there will be a pretty good game on the field.

The Volunteers should have trouble moving the ball against a Nittany Lion defense that is led by linebacker Paul Posluszny. Vols quarterback Erik Ainge and wide receiver Robert Meachum (1,265 yards receiving, 11 touchdowns) had better hook up a few times early.

The Demon Deacons did a wonderful job navigating their way to a BCS game after being sad sacks a year ago. Along with Rutgers and San Jose State, they are the biggest stories in college football this season.

However, Cardinals' quarterback Brian Brohm leads an offense that averaged 476.8 yards per game. Should be an entertaining, high-scoring game.

The nation caught Darren McFadden fever toward the end of the season and the Hogs' tailback might be the Heisman favorite going into next season. However, adding to his 1,558 yards rushing this season will be tough against the nation's No. 3-ranked defense.

Wisconsin might be irritated for not being considered for a BCS game despite going 11-1, but it played Bowling Green, Western Illinois, San Diego State and Buffalo in the non-conference season. That's college football's version of hiding under the bed.

The Aggies, who padded their record with non-conference wins over The Citadel, Louisiana-Lafayette, Army, Louisiana Tech and Eastshore Boys Academy, completely changed their season when they upset Texas.

They now look like a legitimate matchup for a Cal team that wasn't quite good enough to get the job done in the Pac-10. Cal's DeSean Jackson and Marshawn Lynch are reason enough to turn on this game.

Poor Rutgers. One triple overtime loss away from a BCS playoff berth. Instead, the Scarlet Knights get a trip to Houston. Can you say booby prize?

The Big East must have been studying the Pac-10's bowl arrangements. In any event, Rutgers lands a match against a Kansas State team that has a win over Texas to its credit.

Sure, we all love Las Vegas, but the Mountain West powers-that-be should be slapped for having their conference champ, which went undefeated in league play, in this bowl against an underachieving Ducks squad that went down the tubes.

That being said, the game matches the nation's No. 5 (BYU) and No. 8 (Oregon) offenses. It should be an offensive slugfest and decent viewing if “Hogan's Heroes” is the best alternative.

If you are awake for this one, it means you didn't have much fun on New Year's Eve. It's understandable why you would want to sleep in.

Nebraska padded its win column by playing Nicholls State, Louisiana Tech and Troy. Auburn is the real deal and it should take care of business.

The Beavers are the interesting half of this mildly-entertaining matchup. They beat USC and won seven of their final eight.

The Tigers, in contrast, gagged when it got tough in the Big 12. They lost four of five after a 6-0 start. OSU wide receiver Sammie Stroughter (1,206 yards receiving) is the guy to watch in this game.

Offensive stars will be out in force. West Virginia quarterback Patrick White and tailback Steve Slaton, and Georgia Tech wide receiver Calvin Johnson should give fans lots of thrills.

Tech quarterback Reggie Ball offers thrills in a different way. He threw 14 interceptions this season. Lots of points and little defense will allow CBS to sell ads in the fourth quarter.

The attraction here is Hawaii quarterback Colt Brennan, who has thrown for 4,990 yards and needs two touchdown passes to set the all-time NCAA record for most in a season. David Klingler of Houston holds the record with 54 set in 1990.

For fans of offense, this game has produced 298 points in the last three seasons. Most of the points could be scored by Hawaii. Arizona State players will be partying all night on the beach with fired coach Dirk Koetter.

The Hokies allowed just 11 touchdowns all season. If punting floats your boat, climb aboard.

The Terps, who fashioned a pretty good run at the ACC title, face the nation's 114th-ranked defense, so points shouldn't be a problem.

Purdue quarterback Curtis Painter should help make the game exciting. He has thrown 18 interceptions this season and for 3,721 yards.

The Bruins have played pretty good defense all season, but their performance against USC was off the charts. Don't expect a repeat in this game.

The curiosity here is how things went so wrong at Bobby Bowden U. Don't miss something important like Bingo for this one.

The Longhorns, a team developing under first-year quarterback Colt McCoy, definitely are worth watching. Unfortunately for them, they were dumped into the equivilent of bowl hell.

They are facing the horrible Hawkeyes, who have lost five of their last six games and should be home shoveling snow. Texas has landed in the ultimate no-win situation.

The Gamecocks and Steve Spurrier had just one decent win this season, over Clemson. Houston, which averages 439.9 yards of offense, won in a bad Conference USA.

Navy played two premier teams, losing 38-14 to Notre Dame and 34-0 to Rutgers. Boston College should handle business unless it gets thrown under the Meineke Car Care bus.

Dick Tomey has done a wonderful job in San Jose. That being said, the Spartans lost every key game they played this season – to Boise State, Nevada and Hawaii. They also failed to beat an opponent with a winning record.

The Lobos should be at home cleaning out the rain gutters for their moms. You can watch New Mexico tailback DonTrell Moore slug it out three yards at a time, or you can better spend your time with a “Blue Collar Comedy Tour” rerun.

Kentucky ranks No. 118 in the nation in total defense, one spot worse than Temple. If Clemson doesn't win this mismatch, it should disband its program.

Congratulations to the Insight Bowl staff, which turned away from the Pac-10 in order to produce this clunker. Fortunately for all concerned, it's on the NFL Network, so nobody will see it. Tech should throw for about 800 yards against a crummy Gophers defense.

Do you think the Hurricanes, who are used to playing in high-profile bowl games, will be fired up for a trip to Boise?

For the gamblers among you, Utah has won three of four, including a 33-31 loss to conference champ BYU. Tulsa, meanwhile, lost three of its last four.

Sure, South Florida had a nice win over West Virginia. But it padded its record with games against McNeese State, Florida International and Central Florida.

As far as East Carolina, you couldn't get Johnny Depp to watch these Pirates.

Before you check out the Chippewas and the Blue Raiders, consider that Middle Tennessee played quality teams in Oklahoma, Louisville and South Carolina and lost by a combined 155-24. In automotive terms, that's a lemon.

You often hear there are no losers in a bowl system. Well here is a game that guarantees a loser with two 6-6 teams stinking up the joint. Mike Shula's reward for getting his team to this game was a pink slip.

This game will be kind of like somebody throwing up on the school bus. Funny at first, until the smell starts to grow.

This one was scooped up by ESPN2 because ESPN had a bass fishing tournament scheduled for that time slot. You can bet that after watching this game the Canadians will sign up their sons for – curling.

Crummy leagues improved their standing. The only thing in this bowl – other than Rice wide receiver Jarett Dillard (82 catches, 1,176 yards, 20 touchdowns) – is Alpo.