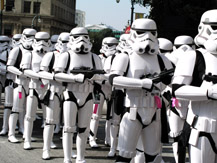 When more than 200 self-recruited “ Star Wars ” Stormtroopers march in the Rose Bowl parade on New Year's Day behind creator George Lucas, they'll be demonstrating once again that a loyal fan base can complement the power and staying power of the entertainment that they celebrate.

For George and Me , Internet broadcaster Sky Wilson interviewed Star Wars fans in Great Britain and the U.S. and produced a documentary that celebrates their creativity. It's reflected in Star Wars -themed charity work, fan films and customized cars rigged out as X-Wing fighters.

Wilson, the creator of the Internet TV show “Inside Report,” interviewed a Norwich, England, Star Wars club that had started collecting action figures at garage sales. She questioned fans at the Celebration III Star Wars convention in Indianapolis last year. She talked with a pair of British fan filmmakers who release their work free on the Internet, asking only for donations to the charity Save the Children.

The second documentary, Done the Impossible: The Fans' Tale of Firefly & Serenity , tells how loyal followers of the “Firefly” TV series, called browncoats, saved the day after Fox cut the cult favorite in 2002 after just 11 episodes. They used the Internet and e-mail campaigns to stoke protest and even took out an ad in Daily Variety to pressure Fox.

Ultimately, creator Joss Whedon, of “Buffy the Vampire Slayer” fame, took the project to Universal Studios and made a full-length feature film, Serenity , which tied up “Firefly's” major plot points.

Done the Impossible is the story, told by the show's stars, fans and Whedon himself, of how the canceled TV series became a (modestly) successful movie.

Movies about film fans have been difficult to make since a mocking 1999 documentary titled Trekkies , about Star Trek fans, made many of them skittish of interviewers. “When we put out a call for George and Me , people initially were very wary,” Wilson says.

“We wanted to show the positive effect that Star Wars had on people,” she says.

Eventually she was able to convince people to talk to her.

“We interviewed over a hundred people and we took what we thought were most interesting,” Wilson says.

Feedback has been positive, she adds. “One said, ‘It didn't make us look bad.'”

Among the people she interviewed was Albin Johnson, the founder of the 501st Legion Star Wars Stormtrooper group, which has more than 3,300 members and chapters in 37 countries. The 501st does lots of fundraisers for hospitals, sick children and other causes and appears at baseball games and now the Rose Bowl. A two-hour documentary about the 501st, Heart of an Empire , will be released next year. Other groups, such as Star Wars Chicks, raise money for breast cancer research.

Documentaries can be slow and expensive to make. Heart of an Empir e has taken five years and has cost roughly $100,000 already. Producer Jay Thompson, a Greensboro, N.C., native, says, “A lot of what we've done is through the charity of other people.”

Done the Impossible took a little over a year, mostly to create the extensive DVD-ROM extras.

George and Me took two years. Wilson says she “poured a lot of money into it.”

“Quite a bit of savings,” she says. But “we've mailed DVDs to every country: Brazil, Uganda, the Philippines, Australia, the Eastern bloc, Scandinavia.”

Well-known Celtic music groups such as Emerald Rose, the Bedlam Bards and the Brobdingnagian Bards of Austin, Texas – all fans of “Firefly” – produced an original score for Done the Impossible . Director of marketing Jeremy Neish estimates that they've sold 5,000 to 6,000 copies and “sales continue to be steady.”

Both Done the Impossible and George and Me are available over the Internet.

The marketing of the documentaries is viral, spread via the Internet, sci-fi conventions and word-of-mouth.

Wilson now is working on a Christmas special interviewing new fan-filmmakers and gathering messages from Star Wars actors David “Darth Vader” Prowse and Jeremy “Boba Fett” Bulloch. She said a documentary on fans of the four-decade-long British children's drama “Doctor Who” would be out sometime next year.

Filmmaker George Lucas is this year's grand marshal at the Rose Bowl parade in Pasadena, Calif.