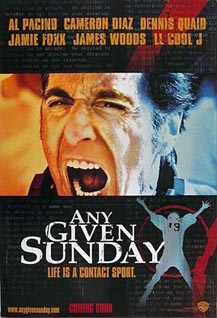 Football is America's greatest sport. The epic spectacle that takes place over four quarters contains more athleticism, passion and drama than all other sports combined. I believe when it comes to football, there is no rival.

So it should come as no surprise that the greatest sport movies are those that center on tossin' around the ol' pigskin. The next time you're flipping channels on a day when football is not being televised, or you're looking for a good DVD to pop in your player to kill time, consider these great football films. It'll make the wait until the next big game go that much faster.

Burt Reynolds set the bar high for football movies in his role as Paul Crew – quarterback, badass and convicted felon. The climactic game pits the prison guards against the prisoners.

The struggle for touchdowns between the Guards and the Mean Machine is football you only wish you could see played on the field. (Or, you could just go to any Raiders game and see it for real.) Burt and company fight for their lives, kick guys in the balls and break friggin' necks. It doesn't get any better than this.

The 1971 original starring James Caan and Billy Dee Williams is the only movie where men get a free pass to openly cry. (OK, maybe Field of Dreams qualifies too, but that's baseball.)

This story of the real-life friendship between Chicago Bears teammates Brian Piccolo and Gale Sayers is touching. If you don't cry during the final scenes, you're not a real man.

You don't have to be a fan of the Philadelphia Eagles to appreciate the true story of quarterback Vince Papale. Mark Wahlberg plays the legend who lived the dream that every joe average football fan has – to actually get on the field and play with the pros.

Sean Astin plays Rudy, a kid who dreams of one day playing for Notre Dame. Everyone tells him he's too small to play football – and not just because he played a hobbit in those Lord of the Rings movies.

This is one of those heartfelt dreams-can-come-true movies that avoid getting overly sappy. OK, maybe it gets just a little sappy.

We've seen this kind of sports movie a thousand times. But you know what? I like that movie.

This instant classic stars Denzel Washington as real-life coach Herman Boone, who brought together a racially divided community by leading the Titans to victory with a winning season. Hope I didn't ruin the ending.

Billy Bob Thornton plays the factual Gary Gaines who coaches the Permian High Panthers in Odessa, Texas where high school football rules all. This gritty drama explores the pressures high school kids encounter when their lives are made or destroyed based on one football play.

If you think pressure is playing Madden on Xbox, then watch this movie and see what it's really like. As a side note: the NBC series is a great expansion of the film.

James Van Der Beek, formerly of “Dawson's Creek,” puts on the pads and joins the football team! In New Canaan, Texas (Texas seems to figure a lot in football movies), the high school football team is the center of the universe.

The Coyotes, under pure evil coach Bud Kilmer (Jon Voight), have won 22 straight divisional championships. Can back-up QB Dawson fill the shoes of their injured star quarterback? While there are some amazing football set pieces, this film is perhaps better known for one involving whipped cream and actress Ali Larter.

No sporting event is complete without someone randomly chanting, “You can do it!” Yes, it was Rob Schneider who first uttered this classic catchphrase in The Waterboy and now it is spoken, screamed and well, more likely it is loudly slurred, by football fans at stadiums all over America.

If you like Adam Sandler, football and lowbrow humor, this is for you and all your tailgating buddies. Another highlight includes Fonzie as the wimpy coach who finally has his day.

Football is a violent and intense sport. Director Oliver Stone attempts to capture these harsh realities in this behind-the-scenes drama focusing on a fictional team called the Miami Sharks. (Stone was unable to secure an NFL license for his film due to some of the dangerous subject matter portrayed such as drug use, violence and sex.)

Aging star quarterback, Jack “Cap” Rooney played by Dennis Quaid suffers a potentially season ending injury and is replaced by unpredictable newcomer Willie Beaman (Jaimie Foxx). Coach Tony D'Amato (Al Pacino) must battle back from four straight losses to earn a place in the playoffs while feeling the heat from team owner Christina Pagniacci (Cameron Diaz). This brutal look at the NFL is certainly worth seeing for the simple fact that it was not endorsed by the NFL.

This indie gem tells the story of football superstar “Barefoot” Bobby Briggs in mockumentary fashion. The Austin Steers running back has been convicted of murder.

Will he be allowed to play with his team on Mega Bowl Sunday before he is executed? Seek out this surprisingly smart film that takes a satirical look at pro football and capital punishment.

ILLEGAL USE OF HANDS!

This forgotten 1979 camp classic is the female version of Revenge of the Nerds and it features a climax involving a legendary “strip” football game. Where else can you see an underneath shot of an all topless female huddle? Awe-inspiring.

The Three Stooges play college football and, you guessed it, hilarity ensues.

Inspired by the 1987 NFL season – the football pros have gone on strike, over (shock) money and replacement players are needed. Enter Keanu Reeves. Whoa.

A rare look at the way football is covered, this TV movie exposes the rise of Monday Night Football through the men behind the mike. Howard Cosell is almost sympathetic as played by John Turturro.

Hotlips Hoolihan cheers on our Korean soldiers in a football game played to let off a little steam.

“Ladies and Gentlemen, our corporate anthem.” This is not really a football movie – but it feels so authentic, like it's tailor made for pigskin fans.

Chris Gore is an author, filmmaker, creator of Film Threat, as well as a long-suffering fan of the Detroit Lions.