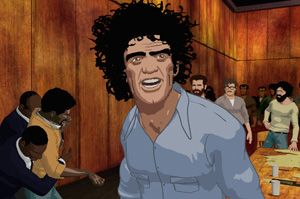 It's hard to talk to your family for the entire duration of the holidays, and it's just not possible to be eating the entire time either; that's why there is the holiday movie! A trip to the theaters gives a family quality time without having to worry about quality communication.

Afterwards, it's just as fun to talk about how good the movie was, as it is to go over how much of a waste of time it was. Either way, families are brought together and the spirit of Christmas endures. So here's a select group of holiday movies to unwrap this season.

In this updated version of E.B. White's children's classic, all sorts of celebrities lend their voices to the story of Wilbur. The runt of the piggie litter moves to a new barn and begins an unlikely friendship with a spider named Charlotte, whose web weaving craftiness saves Wilbur from the bacon shop.

Since this is Hollywood, the whole barnyard is filled with film stars, or at least their voices, including Oprah Winfrey as the voice of Gussy the goose, Julia Roberts as the voice of Charlotte, Steve Buscemi as Templeton the rat and many others.

Charlotte's Web is currently in theaters.

OK, I know what you're thinking, this is just Lord of the Rings , but with dragons. And yeah, it's got magic, weird fake British fantasyland accents, huge hordes of evil people carrying torches, some really dark looking evil dudes on funny thrones, glowing swords, those really intense opera voices in the trailer and all the characters have weird make-believe names (Eragon, Brom, King Galbatorix, etc.).

But, come on. Those dragons look pretty sweet and it's not like there's going to be another Lord of the Rings sequel. So, geek it out, and take what you can get.

Eragon is currently in theaters.

THE PURSUIT OF HAPPYNESS

Everyone knows that the holidays are not complete without a tear duct manipulating tale of the triumph of love, the perseverance of the human spirit, or Will Smith overcoming a silly mustache.

This film finds Smith as a barely employed dad trying to keep it together with his son after they are evicted from their apartment. Smith's character, based on the real Chris Gardner, then scores an internship at a brokerage firm, but has to move around – even staying in a shelter in the meantime – in order to make ends meet.

Movies like this are mom kryptonite. Watch this with her and she's going to be talking about how much Smith “really seemed to care” with a lump in her throat until next Thanksgiving.

The Pursuit of Happyness is currently in theaters.

In a musical take on the story of Motown legends the Supremes, Dreamgirls takes the fictional “Dreamettes,” and sets their semi-tragic story to music, following from a recent musical of the same name. The film's impressive cast includes Beyonc é (she doesn't really need the last name at this point), Eddie Murphy and Jamie Foxx.

It'll take you from their start in Chicago, to their big shot at the Apollo and then backstage for all the infighting, intrigue and probably some singing somewhere in there too. This is another film that will get the ladies talking, and many a fine gentleman dragged to the ArcLight. Dreamgirls is currently in theaters.

In Clint Eastwood's much-lauded second WWII movie of 2006, we see the (what I would imagine to be) extremely heartbreaking story of the battle of Iwo Jima from the Japanese perspective. I think it's safe to say there will be a lot of violence, a lot of camaraderie cut through by violence and a violent end for some or all of the main characters.

There was no exit strategy for the Japanese at Iwo Jima, and Clint Eastwood was bold enough to tell the human story through the eyes of those who at the time were America's enemies. Clinton Eastwood is old, but his artistic balls are the envy of Hollywood.

Letters from Iwo Jima is currently in select theaters.

Written, directed and starring Sylvester Stallone, this is the unlikely end to a series that – depending on your taste – should have ended a long time ago, or   should go on until Rocky is just a fighting cyborg skeleton.

As always, Rocky is the underdog, but instead of just being undersized and unknown, this installment of Rocky finds the slurring pugilist working his way through the untested challenges of late middle age.

I think I saw a trailer that showed advertisements for Viagra and that one prostate medication on Rocky's shorts. Addrrriiiiieennnn! I've got a growing problem!

Rocky Balboa is currently in theaters.

De Niro loves dealing with the CIA. Instead of training Collin Farrell, this flick has him directing Matt Damon, Angelina Jolie, Alec Baldwin and even himself. This film tells the story of one of the men who started the CIA, and the inevitable toll all the secrecy and cold war paranoia took on him and his family.

It looks like there's a lot of entertaining torture violence, a fair amount of horn-rimmed glasses and probably a lot of hard-boiled cigarette smoking as well. I bet when any two characters sit down in an office they pour heavy glasses of Brandy from a crystal snifter. Awesome.

NIGHT AT THE MUSEUM

Museums can be scary with all the old dinosaur bones and fake cavemen, but add in Ben Stiller as your prototypically bumbling night watchman, have everything come to life at night due to some old curse, and you're pretty much guaranteed a better time than at any “real” museum.

With everyone from Robin Williams to Mickey Rooney filling out the cast, there's probably not a “Hamlet” level plot, but very likely enough visual candy to give the kids a stomachache.

Night at the Museum releases in theaters Dec. 22.

Holiday audiences love nothing more than the triumph of the human spirit, but throw in some football and Matthew “bongo maniac” McConaughey as an inspirational coach building a team back up after a tragic plane crash, and you're left with what could be the Citizen Kane of holiday movies.

Imagine a hot dog of perseverance wrapped in the alluring bacon of McConaughey's Texas drawl, and you'll get the idea of what's going on here. For those of you matching your diet, don't fret; this movie contains only good cholesterol.

We Are Marshall releases in theaters Dec. 22.