Most Valuable Players: In Sports Movies 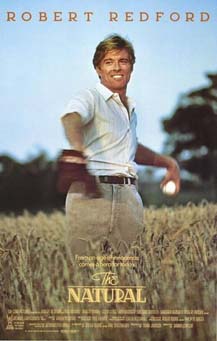 It takes more than an exceptional physique to deliver a realistic performance in a sports film; it requires great acting skill. Sure, in some cases, doubles are used for impossible plays, but the burden is on the actor to convey a sense of believability – I mean, in real-life could they really throw a punch, swing a bat, catch a ball or win the race?

There's a short list of films in which certain actors' performances prove they have both the athleticism and the talent to make the winning play in the wide world of sports.

Bar none the best boxing scenes ever put to film and Bobby D's performance is frightening, breathtaking and beautiful.

Burt Reynolds in THE LONGEST YARD (1974)

Reynolds is at his likeable best in the best prison/football movie ever made pitting the Guards against the Mean Machine. Forget that Adam Sandler remake, this is the one to see.

Quote : “I think I broke his friggin' neck!”

He's done more baseball movies than any other actor and this moving father-son tale is his finest role.

The Italian Stallion debuted in what now feels like a somber independent film as Rocky is introduced as a total loser. If you're a fan, when you run up stairs you always hear that music in your head.

You know what I mean. And with the sixth and final film, Rocky Balboa hitting theaters, the Rocky legacy is secured for years to come.

Quote: Apollo Creed: “Stay in school and use your brain. Be a doctor, be a lawyer, carry a leather briefcase. Forget about sports as a profession. Sports make ya grunt and smell. See, be a thinker, not a stinker.”

Each time Redford steps up to bat, you can feel the chills. And do you remember the name of the bat? Wonderboy.

Matthau proves that coaching and beer go together like peanut butter and ladies.

Quote: Engelberg: “You're not supposed to have open liquor in the car. It's against the law.”

Coach Buttermaker: “So is murder, Engleberg. Now put that back before you get me in real trouble.”

Newman as team captain Reggie Dunlop is charismatic on and off the ice as he tries to tame the insane antics of his team while juggling a completely messed up personal life.

Quote: “You all saw what happened. Stick down, gloves off. He challenged the Chiefs. Called us names, but Dave was there. Dave's a killer.”

Men who cry watching this film get a pass. This touching real-life story about the friendship of teammates Gale Sayers and Brian Piccolo will move the toughest to tears every time.

Quote: “Ernest Hemingway once said ‘Every true story ends in death.' Well, this is a true story.”

Before NASCAR was the hottest thing on TV, Tom Cruise hit the track to school amateur gearheads in the rules of the road.

Gooding was over-the-top and fun to watch as wide receiver Rod Tidwell. If you don't believe his acting was top-notch, then just look at the naked and bald gold man on Gooding's shelf. You can call that shiny thing “Oscar.”

Quote: “Show me the money!”

Cusak turns in a touching portrayal as George “Buck” Weaver in this historical retelling of one of baseball's enduring controversies.

Quote: “You say you can find seven men on the best club that ever took the field willin' to throw the World Series? I find that hard to believe.”

Quote: “I have to confess I've never let the children watch a hockey game. I have a theory that children imitate what they see on a TV screen. If they see violence, they'll become violent.”