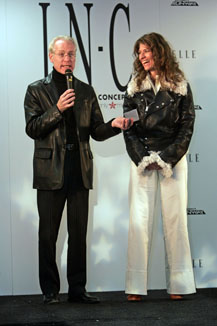 The answer to one question sealed the deal for Tim Gunn to join Bravo's “Project Runway” as mentor to the aspiring designers.

“Can you make a wedding dress in two days?” the producers asked him.

Gunn, the chairman of the Department of Fashion Design at New York's Parsons New School of Design, is long accustomed to pushing students through deadlines.

He shrugged and said, “Well, sure.”

“You're the only person who has said yes,” replied the surprised TV producers, who were looking for a consultant.

More than two years later, thanks to the walloping success of the reality show, Gunn is a high-profile personality with major celebrity status.

Gunn is a gentle, soft-spoken man with graying hair, a stereotypical professorial look and a weakness for Banana Republic clothes. At 53, he appears in People magazine's “Sexiest 100 Men Alive” issue along with George Clooney, Bill Clinton and Harrison Ford.

Every season the television show brings together a group of upstart designers. Each has a clear personal aesthetic and distinctive, quirky personality. Each week the group is given specific challenges. For example: create an outfit with materials from a grocery store; dress a dog; design new postal uniforms.

Throughout each exercise, Gunn is their teacher, hand-holder, counselor and timekeeper. He tends to jump-start them with such signature lines as “Carry on,” “I am concerned” or “Make it work.”

At season's end, four contenders create collections that are sent down the runway during New York Fashion Week. One person is named the overall winner and gets a mentorship and money to start their own line.

Certainly a high point in the show's history came in the first season when it won an Emmy.

“We felt so validated,” Gunn says. “It was a non-network show. And we won.”

The judges' comments are decidedly harsh, and the more complimentary observations are usually edited out. But Gunn is the quiet, kindly voice helping contestants polish their visions and pump their egos.

His ability to critique in a non-combative way, he says, comes from long years of teaching. It did not come from his own upbringing in Washington, D.C., which he describes as terrible.

“I had a miserable childhood. It took years of psychiatry to get past it.” Unhappy with himself, he says, he withdrew, played the piano, wrote poetry and didn't come into his own until he discovered art.

He studied at Yale and entered the art world at the Corcoran Gallery in Washington. At one point he designed architectural models for four years.

Twenty-three years ago he moved to New York and Parsons to become associate dean. The move was difficult, he says. He was overwhelmed by the contrasts of the polite, civilized Washington with the raw, rough-edged New York.

In 2000 he was named chair of fashion design and is credited with raising the quality and profile of the school.

Gunn's “Runway” experience has been transforming. Always shy and hesitant even in his early teaching days, he says his role on the television show has changed how he feels about himself. He has gained confidence and a better sense of himself.

As for the future of American fashion, observing from his unique view in the classroom and on the show, Gunn says he is optimistic. “I have never seen more opportunities,” he says.