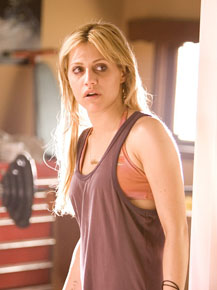 Director Karen Moncrieff's upcoming feature The Dead Girl is going to scare the hell out of you. Set in the boonies, the story begins with the goings-on in a rural town when the corpse of a young woman (Brittany Murphy) is found in a field by a townie (Toni Collette).

This first segment is entitled “The Stranger,” after which, the story shifts into reverse. The following acts, “The Sister,” “The Wife,” “The Mother” and “The Dead Girl,” reveal the intertwining details of the events that eventually lead up to the discovery of the body.

“When Karen (Moncrieff) asked me to do it – I was offered the role of Krista (the Dead Girl),” says Murphy reflecting on how she joined the project. “I started reading it [the script] and I thought it would be a psychological thriller. I'm reading it and I forgot, by the end of act one, even thinking about who did [the murder] and kept reading. In the truest sense of the statement, the journey did become my destination because these characters popped off the pages ... [there's someone] from every different background, and they have one common thread.”

In the film, Moncrieff doesn't dumb anything down which allows the audience to experience a sense of discovery. The way that the actual murder act is dealt with enhances the anticipation and serves the thrust of the storyline like rocket fuel.

Moncrieff successfully pulls off a Tarantino by telling her tale in a character-driven way that seems disjointed, initially, but comes together seamlessly at the end in a sonic boom of clarity, like in Pulp Fiction . Murphy concurs with the sentiment.

“I loved Krista, she's so spectacular. She has so much hope, so much light and she tries so hard ... she really just wants to do her best in this life and in this world to make sure that her baby is taken care of, to be a great mom – unfortunately, she's bipolar. [It's] why she's living so mercurially and in the second, not even in the minute. I thought that she was a lovely, exciting person to be able to play.”

As fate would have it, Moncrieff's inspiration for the film came to her a few years ago while she served jury duty.

“[Krista] was specifically derived from a true person, a real person that passed away, who didn't get to be represented [on screen before],” Murphy reveals. “I wanted to [truthfully] represent that person's life. I asked Karen the reason that she thought of me for this – I think it was because of prior performances – and a little part of me reminded her of the girl who she sat on jury for the death of. [After] I'd heard Karen's vision for her film, along with this really stunning and unique script – it was something that I really could not be a part of.”

The Dead Girl is a far cry from the films that Murphy has been attached to as of late and in order to prep for this particular role, the actress did a lot of background study on her own time before approaching the film's set.

“I did do research. Like any good journalist, I prefer to keep my [sources] confidential. The people that I did research with preferred to remain anonymous and I would like to respect their wishes,” she says while recollecting the oath she'd made. “A good journalist never gives up her sources. But, they were some really incredible people and I feel grateful for the people that shared their lives with me.”

In the film, Murphy's character is at odds with her mother (Marcia Gay Harden), so she runs away to Los Angeles. In real life, Murphy's relationship with her mom is the polar opposite. When asked what she's learned, the actress is quick to reply:

“Have a sense of humor about life [and] to not take myself too seriously. Through example, [I learned about] being a strong, independent woman. There's a great Maya Angelou quote: ‘I am woman, phenomenally; phenomenal woman that is me,' and I think of my mom when I hear that. If I could be a third of the woman that she is and have a third of the strength that she has, then, I would have done good by this life."

The Dead Girl is currently in select theaters.