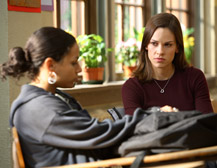 This true-life drama about an inspiring teacher follows a familiar template that has been honed by classroom classics ranging from To Sir, With Love to The Blackboard Jungle . It's cliched, corny, formulaic and predictable. It's also irresistibly effective.

At the center of the story is wet-behind-the-ears English teacher Erin Gruwell (Hilary Swank) who is too naive to realize that what she intends to do can't be done. So she does it.

Reporting for her first day of work at Wilson High School in Long Beach, Calif. she is assigned to a class of students who have been abandoned by both the social and educational systems. The class includes gangbangers, drug dealers and the homeless. Her job, her boss explains, is to babysit them until they get bored enough to drop out, at which point they no longer are the school's problem.

But she is determined to teach them – and not just enough so that they can get a GED. She intends to turn them into scholars.

She uses a variety of techniques, but the most effective is assigning each student to keep a journal. They live in a harsh world where showing weakness is considered a fatal error – literally, in some cases.

But in their journals, which Gruwell assures them no one but her will ever read, they can reveal the pain, disappointment and disillusionment they feel. And through their writing, they come to appreciate the creative process and those who have mastered it, from Will Shakespeare to Tupac Shakur.

Swank does a masterful job inhabiting her character. In return, the role provides her with plenty of dramatic fodder as Gruwell works her way through a virtual smorgasbord of emotions, from innocence and anger to street-wise crustiness and the confidence she can take whatever the students or the school throws at her. Of course, this plucky-young-woman role is familiar stuff for Swank, who took home an Oscar for playing a similar character in Million Dollar Baby .

Writer-director Richard Lagravenese ( Living Out Loud ) shamelessly flaunts the story's manipulative elements. Our hearts ache when students are snubbed by their parents, our ire flares when school administrators refuse to provide Gruwell with the textbooks they give to the other students and our pride swells when neither the teacher nor her students back down from their impossible dream.

It's that earnest aura that makes us overlook traits that would be considered shortcomings in any other context. Sure, we've been here and seen all of this before. But when it's this well done, we thoroughly enjoy seeing it again.