Emily Haines: The Piano Has Her Back 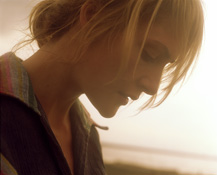 There's nothing that can come between Emily Haines and her piano.

“That's the one [thing] that's not going anywhere. It's like having an elephant for a pet,” says frontwoman of the dance-rock outfit Metric, who trades in sweltering rhythms for a more subdued solo effort with Knives Don't Have Your Back.

Long-term relationships – instruments notwithstanding – can be rocky, with extensive tours and being seen as a “Poster of a Girl.” Explicitly detailed in “Crowd Surf Off a Cliff,” Haines painstakingly reveals that she'd “rather give the world away than wake up lonely.”

It's only then, as the final piano notes hit and she's found someone that the isolation still permeates, that it's realized the only connection they have is a long-distance phone call.

It's the soft keys that have always been there – a moral compass that became the conductor for the record's cinematic backdrop of subtle sounds. “Dizzying highs” and lowest lows curl for the haunting vocals of Haines. The daydream exists and as there is no other direction than just letting go and creating space, as was the case for Haines to go at it solo.

“Sometimes things just need to happen. I didn't really know what I was doing until I'd done it. It was something I felt I was missing – the songs that I write anyway. I just had a vision of really needing to have music that sounded like that; sort of a companion to the Metric catalogue, and it turned out to be exactly that. I'm happy about it,” remarks Haines.

Persevering through melancholy, could Haines achieve exuberance? Written and recorded during a four-year span along both coasts (Los Angeles and New York) and her native country of Canada, the Knives process was a tumultuous affair. The first recording sessions for the album occurred in 2002 shortly after the death of her father, poet Paul Haines.

Under dire circumstances Haines reveals herself to an audience that might only see her as dance frenzy. The poster that became so synonymous with Haines, now becomes fully realized – a true portrait of an artist finding herself through her music.

She states, “Making the record was the only way to get through that path. More and more I'm realizing that is the case, that is the function of music. It's not my goal to be really alienated. I realize now by making a record that was stripped down and appealing more to the universal emotions that everybody is going through, it made me a feel a lot less adrift in the world.”

Introspection or not, Haines detests the label of singer-songwriter, although it's something she has become and feels comfortable with. Comparing it to that of a waitress who could only talk about waiting tables, she sees many musicians as one-dimensional. The preening artist who sings alone with their acoustic guitar under a sole spotlight is something not indicative of Haines.

“I'm always stopped by all the other people who I feel are doing it for the wrong reasons. I'd rather not do it than be loved [for] something I really don't want to be a part of. It's just like anything else [being a singer-songwriter]. It's just making it a twist and attracting the people that you want. The best way of getting rid of something that you hate, is not being it.”

Becoming three-dimensional receives acclaim, but does require assistance. Never a fan of going at it alone, on tour Haines is accompanied by a rhythm section she says is '70s infused. With additional help from Canadian compatriot Guy Maddin, the most somber of sounds will be paired with film images from a director known for creating The Saddest Music in the World .

It is the connection that remains. Surrounding Haines throughout her life has been the music; it generates, remembers and will continue to prolong a composition between old and new, breathing middle ground for fresh ideas.

“I can already hear how it [new solo work] smacks into the sound of the early writing that I'm doing with Metric,” Haines says. “Kind of more fluid between the two sounds. I'm going to just try and not think about it too much and hope that it comes naturally.”

Knowing her, the piano will be there too.

Knives Don't Have Your Back is currently available. Emily Haines and the Soft Skeleton will perform Jan. 24 at the El Rey Theatre in Los Angeles. For more information, visit www.emilyhaines.com .