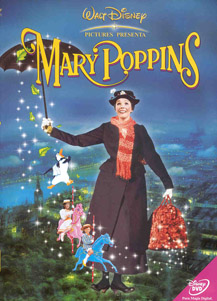 If you've ever wandered around the house, with a miserable cold, quietly chanting about how “a spoonful of sugar helps the medicine go down,” then you must bring yourself – by flying umbrella or jumping carousel horse, perhaps – to the El Capitan. The theater's special “sing-a-long” engagement of the Julie Andrews classic Marry Poppins runs from January 11 to 31 at Hollywood's famed movie house.

In the film, Andrews stars in the title role of an out-of-town nanny with seemingly magical prowess who, upon inheriting the job of caring for two spoiled English children, turns their world completely upside down. She brings in a mix of magic and manners, and makes everyone in her presence either respect or fall in love with her.

When the film screens at the El Capitan during its return limited engagement, the words to all the songs will be projected on the big screen, so that guests can actually sing along to their favorite tunes.

El Capitan Theatre is located at 6838 Hollywood Blvd. in Hollywood. Tickets start at $12 for general audiences. For more information,visit www.disney.go.com/disneypictures/el_capitan.