Road to the Championship: Sizing Up the NFL's Playoff Field 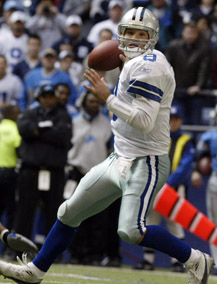 The playoffs are supposed to be a new season, so maybe Eli Manning has it in him to complete 50 percent of his passes, Carrie Underwood's friend Tony Romo will stop turning the ball over and Rex Grossman can get red-hot and actually register on the quarterback rating chart.

And maybe one of these years, though it probably won't be this one, Peyton Manning will even make it to the Super Bowl with the one-dimensional Colts.

Misery loves company and coaches worrying about quarterbacks have plenty of it. It's the dominant theme of the postseason as Bill Belichick is the only one who can sleep peacefully. Tom Brady is 10-1 with three Super Bowl victories. Now consider the rest of the field:

–The other 11 quarterbacks are a combined 13-21 in the playoffs. Six of the 11 have never won a playoff game.

–Two have lost Super Bowls: Baltimore's Steve McNair when he was with the Titans and Seattle's Matt Hasselbeck. McNair, who is 5-4 in the playoffs but has not started a postseason game since 2003, is the only quarterback starting this month, other than Brady, with a winning postseason record. Hasselbeck is 2-3.

–Four are 0-1 in the playoffs: Eli Manning, Chicago's Grossman, New Orleans' Drew Brees when he was with the Chargers, and Kansas City's Trent Green.

–Chad Pennington of the Jets has the third-best playoff record among this year's postseason QBs. He is 2-2. Peyton Manning is just 3-6. Philly's Jeff Garcia was 1-2 with the 49ers.

The Bears are the NFC's No. 1 seed, but are just 2-6 in the playoffs at Soldier Field, with three straight losses, since their 1985 Super Bowl season. Lovie Smith will stick with Grossman, by default, in the divisional round. His only alternative is journeyman Brian Griese.

Grossman was horrendous against the Packers, finishing with more interceptions (3) than completions (2) before being benched at the half. His QB rating was 0.0. Earlier this season, he had a 10.2 rating against the Cardinals and 1.3 against the Vikings.

“I'm excited about the challenge. I've been in this position before. So I'm just going to go back into my fort and fight my way out,” Grossman says.

Rivers and Romo both made the Pro Bowl but haven't been worthy of the honor down the stretch. Until Rivers played better against the Cardinals, he was in a bad slump. In his previous two games, he had completed just 18-of-53 (34 percent). But he takes San Diego into the playoffs on a 10-game winning streak.

The Cowboys will stagger in after their incomprehensible loss to the Lions, who were 2-13 with seven straight losses. As it turns out, it didn't change the Cowboys' seeding, just their mind-set.

“I can't tell you how disappointed I am,” Bill Parcells says. “This is a low point for me. The lowest in a long time.”

Dallas had a two-game lead on the Eagles and Giants with four to play and wound up finishing one game behind Philly. Romo was 4-1 in his first five starts with 10 TDs, two INTs and two fumbles. He's 2-3 in his last five with six TDs, eight INTs and seven fumbles. “I've got to hold onto the ball,” Romo says.

For the first time in his career, there are media (in the Dallas area) calling for Parcells to be fired. This is his fourth season with the Cowboys, they have not won a playoff game in 10 years – the longest stretch in franchise history – and the energy Romo brought in midseason has vanished.

Who could have imagined the hottest NFC quarterback going into the playoffs would be Garcia?

The AFC Championship Game may be more competitive than the Super Bowl. Clearly, the best teams are in the AFC this season. This is how we rank the 12 playoff teams.

1. CHARGERS: Marty Schottenheimer just became the fifth coach with 200 regular-season victories. But he is a miserable 5-12 in the playoffs. It changes this year: San Diego wins it all.

2. RAVENS: They are 9-1 since Brian Billick fired Jim Fassel and took over the play-calling. But they still win on defense, giving up a league-low 201 points – 102 fewer than the Chargers.

3. PATRIOTS: Tom Brady is 6-0 in Foxboro in the playoffs. He doesn't have the same supporting cast, but he is still Brady.

4. COLTS: Peyton Manning's best chance to get to the Super Bowl was last year. Where is Tony Dungy's defense?

5. EAGLES: Can they duplicate what the Steelers did last year and keep a late-season surge going right to the Super Bowl? The Eagles were 5-6 and won their last five.

6. SAINTS: Two wins and they're in the Super Bowl. Drew Brees' offense is explosive and makes this team dangerous.

7. BEARS: No quarterback, no Super Bowl.

9. COWBOYS: Tony Romo has been exposed, the defense is leaking and Bill Parcells looks worn out again.

10. SEAHAWKS: A couple more weeks and the 49ers would have passed them in the standings.

11. GIANTS: Unless Tiki Barber can run for 200 yards again, their postseason is going to last as long as last year's.

12. CHIEFS: They will be one-and-done. Chiefs got in when Bengals and Broncos lost in OT and Pats beat Titans. Herm Edwards got last-minute help from John Hall (53-yard FG) in '01, from Pats in '02 and Steelers in '04 to get in with Jets.