By Nancy A. Youssef 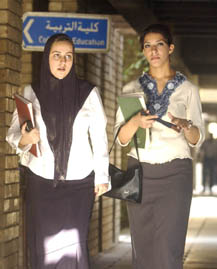 Within the relatively safe confines of Baghdad’s university campuses, a picture emerges of what democracy could look like throughout the country if worries about security hadn’t trumped everything else.

It’s not pretty. Indeed, it’s messy, uneven and at times angry. Students and professors alike are still learning what democracy is and debating how to execute it on campuses – or whether universities are ready for such debates at all.

Like American universities, Iraqi campuses provide a haven for open political thought. The discussions are much more progressive than they are off the grounds, in large part because campuses are among the few places that aren’t overburdened by security problems.

Students hold protests and sit-ins, sign petitions and go on marches, all new since Saddam Hussein fell. This week, a group of students from al Mustansiriya University protested Iraqi national guard officers using their dormitories, saying that space should be reserved for students.

The debates are steeped in religion. Most universities have only two major political student associations: a Shiite Muslim one and a Sunni Muslim one. Each group from Iraq’s historically rivalrous Islamic traditions is advocating a different style of university life, and how much religion should shape it.

Should women be forced to wear head scarves and should they be allowed to wear pants? Can students put up posters of their favorite candidates or would that offend others? Can a Shiite student be treated fairly at a school administrated by a Sunni president, and vice versa?

Politics has become so pervasive that the Higher Education Ministry has posted signs on all campuses that tell students their rights. Among them: "The freedom of opinion expression is a guaranteed right to the entire academic society, under the rule that this does not interfere with a student’s education."

At Baghdad University, students are debating whether women should be forced to wear uniforms: long gray skirts and white shirts. Last year, students largely tossed out the idea of a uniform. But when the school year began earlier this month, it appeared to make a comeback.

At al Mustansiriya, women are forbidden from wearing pants on the grounds. Guards monitor those entering the main gate, and any woman in pants who attempts to enter will be required to leave.

Taki Ali al Moosawi, the chancellor of al Mustansiriya, said the ban on trousers allowed students to focus on their studies.

Sunni students disagree, saying the new rules are in place because the university wants to impose a stricter way of life, one that reflects al Moosawi’s Shiite background.

"There are some problems between Sunni and Shiite groups," said Ahmed Nihaad, 21, a third-year computer science student who’s Sunni. "They are very sectarian. The nationalistic feeling has disappeared."

On the other side of the city, at al Nahrain University, the president is Sunni. Shiite students said they had to form an association to protect their interests. They call their group al Quafar, named after a verse in the Quran. Their counterparts are called Youth and Students.

"We feel the university president is the reason the level of education has gone down." Ahmed Faras, 25, a graduate chemistry student. "All of the good professors who got their degrees from abroad have left."

Faras charged that the top-named chemistry student, who’s Shiite, lost his title to a far inferior Sunni student just because of the religious difference.

The democracy debate takes highly political twists in some places. In ethnic Kurdish areas, administrators are cutting the number of Arab students admitted, saying they have a democratic right to decide who attends.

At al Mustansiriya, when a Sunni professor told Shiite students to take down a religious poster, he was forced to leave under pressure, even though such posters are against the rules. Controversy over the issue briefly shut down the university.

Such outbursts are prompting many professors and the Higher Education Ministry to advocate fewer political discussions, saying students should focus on learning democracy before trying to practice it.

Students who fail exams, for example, cite democracy as a reason to let them take them again. Some drive on the wrong side of the road, and when a policeman asks them why, argue that it’s their democratic right.

Idrees Hadi, the deputy minister of higher education, said it was too soon for political parties to make their way onto campus because that would incite violence. The ministry proposes that students elect a representative to voice their concerns to the administration.

"We do not want political groups. This would negatively affect the universities. Every party would be looking out for their own interests," Hadi said. That’s why "we want to form a union for the students."

Huda al Nuami, a political science professor at al Mustansiriya, agreed: "If we allowed excessive politics in the universities, we would ignite trouble between the students instead of them concentrating on their studies."

There are 20 public universities in Iraq, and the four in Baghdad have more than 70,000 students combined. During Saddam’s regime, there was only one political party on campuses – his Baath Party. His regime made decisions about university life. Students were forbidden from expressing themselves.

There were no courses on democracy; instead, there were required Iraqi nationalism courses. Those have been replaced by courses on democratic governments and human rights. Some campuses have even developed departments dedicated to such topics.

Nadhum al Abadi is an engineering professor at al Mustansiriya and the general secretary of the Green Crescent association on the Baghdad University campus. That group advocates human rights and peaceful dialogue between students and professors.

"When the change happened, Iraq was like a big prison cell that suddenly opened, and people were finally free and able to express themselves," al Abadi said.

"It was like a pressure pot that exploded," he said. "With time, it will calm down."