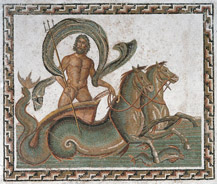 Stories in Stone will bring to your knees. Or it would have if these ancient Tunisian mosaics were seen in their original milieu.

Observed from afar at the Getty Villa, these pantheons to the extensive prequel of The Greatest Story Ever Told resemble autumnal paintings of Athena, Oceanus (who forgot to rinse the seafood salad out of his hair this morning) and battling tigers and lions. While the latter – and Medusa's cognizant mane – points to the platitude “nature finds a way,” the Getty's mosaics attest more to the axiom “Storytelling finds a way.”

It reminds one of Joseph Campbell's observation that if myth and poetry were to die one day, they would spring forth reborn the next as humans need their myths. It's no accident that these stone works have an African genealogy, a culture with a surfeit of storytelling, storytellers and stories.

Though their genesis wasn't completely magnanimous. Patrons often chose these floor adornments as a means to protect their homes or bring good fortune to the inhabitants within, hoping the deity they were stepping on with their horse-dropping-adorned sandals throughout the day, or ocean deity they were rinsing the same residue off on, would honor them.

The extensive process of laying a mosaic – explored in the exhibit – showcases that creating the tableaux of combatants for Wrestlers and Prizes (A.D. 200-300) was a bit more complex than relaying your bathroom (Yes, even with picking up illegal labor in front of Home Depot.).

In collecting strata for the mosaics, ancient artisans had to prep four layers before placing down the final, fifth pictorial layer made of thousands of square-and-rectangular shapes. Best of all, these mosaics gave you something other than dusty Entertainment Weeklies to read while using the bathroom.