Sophia Bush and Sean Bean Thrill in: The Hitcher 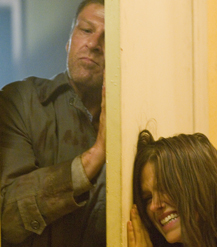 The variety of movies that Hollywood produces in its yearly lifecycle is something akin to the biodiversity of our dwindling rainforests. Each species plays its part, contributing to the sum majesty of cinematic output.

Look closely and witness the romantic comedies abuzz, pollinating the lush flora; the ambitious art films stopping to mark their territory, eeking out the pellets of future influence; the sprightly buddy comedies boring holes into tree trunks; if you attach the micro lens and take a slow pan across the bottom of the canopy, there are swarms of low-budget, high-octane thrillers (the fire ants of the movie world) emerging from nowhere, devouring all in site – usually a donkey or an errant village baby – before dissolving into the leafy shadows.

Each film is nestled perfectly and provocatively in the demographic sweet spot of young moviegoers like a locket in cleavage, offering just enough explosion, blood, shooting, stabbing, car chase and hot chick in bra and panties sequences to guarantee a certain per theater gross in any market (I know they have a formula for it somewhere but to naturalists like myself it is, and must remain, another mystery of the jungle).

Fitting perfectly into the Rogue agenda (not to mention the safety in numbers survival strategy of fire ants) emerges The Hitcher: an ideal date movie for those couples who always wished they could experience the relationship edifying experience of being hunted by a grizzled psycho with no past and preternatural badass murder proclivities.

A remake of a 1986 film of the same name, The Hitcher features Sean Bean in the titular role. The best thing about this movie is Bean, who is undoubtedly its stabbed heart, torturing soul and poisoned pincers. For the actor, who is wry and grizzled (read: British) enough to look the part, what appealed to him about the role was the mystery of the character.

“There's not much info about where he came from, which I thought was quite interesting because it allowed me the freedom to create what I wanted to invent of him as a person,” remarks Bean.

The actor used the dearth of character information to his advantage. He says, “I also thought it was scarier that you don't know anything about him, or where he comes from. I always find that the less you know about people, the less you should trust them. I usually like something to go on, but for this particular movie I was pleased that he was like an angel of death, a phantom wandering the freeways assuming different identities.”

For Grace and Jim, the couple who the Hitcher torments, Bean's desire to remain mysterious contributed to the tension of their exchanges. After a week where hot chick Sophia Bush, and cool, normal dude Zachary Knighton spent time together before shooting to develop their on screen chemistry, meeting Bean's Hitcher was a frightening experience.

According to Knighton, “[Bean] didn't talk to us at all” during the first days of shooting. The first conversation that Bush had with Bean had to do with “how hard [Bean] could put the knife in my face. I was like ‘Hi, how are you, feel free to hit me,'” recalls Bush.

Bean sees his off camera aloofness as a way to make the character's relationships appear more realistic onscreen, especially during their first confrontation. He says, “It actually worked for the scene because we weren't supposed to know each other.”

For Bush, whose short skirted performance as Grace constitutes the second best thing about The Hitcher, the appeal to the “One Tree Hill” cast member was as follows: “It's really hard to find films of quality you want to make, and when this script came, prior to reading it, did I really know that it was going to be anything other than a typical movie of a scary genre?”

Even though this film isn't really anything outside of the “typical movie of a scary genre,” her charisma, or maybe the hive-scented pheromone she emits, is strong enough to make you believe that it is. What further attracted Bush was the challenge of doing an action movie.

Like any good drone, The Hitcher did not emerge from its larval form with complex reasoning and problem solving skills, it was built using nothing other than insect instinct. First time film director Dave Meyers describes the process of shooting the film like this: “The structure of it stayed pretty close uh … we pretty much improvised the whole movie.”

But this is not to say that the screenplay didn't have the supportive nesting of an outline. According to Meyers, “There was a greenlit draft that had a structure. So, there were a lot of times where it was the relationship of the cast that would find the soul of it, and so I really think there was an authenticity to the film.”

The Hitcher at its base, is an authentic film, but not in the way Meyer's describes. The authenticity of this film is in it's doing exactly what it's supposed to do; thrilling mercilessly, thoughtlessly and gloriously, as part of the film biome's grand design.

The Hitcher releases in theaters Jan. 19.