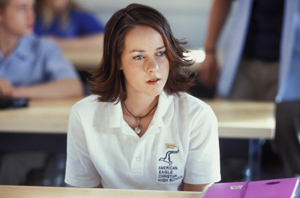 Jena Malone is simply heavenly. The 19-year-old actress and star of the upcoming film Saved!, due in theaters May 28, graciously gave Campus Circle an interview via cell phone during a car ride to a San Francisco airport. If that’s not enough reason to like her, consider the fact that she’s also sweet, articulate and extremely down-to-earth.

Making her film debut in Anjelica Huston’s 1996 film Bastard out of Carolina, Malone played the abused child of mother Anney’s (Jennifer Jason Leigh) boyfriend Glen (Ron Eldard). It was a chillingly honest performance that, undoubtedly, helped her land roles in a wealth of TV and film projects over the next eight years.

In Malone’s most recent project, Saved! — from director and co-writer Brian Dannelly — she plays Mary, a senior at a Christian high school who has good values, cute hair and a pack of super-cool friends. When she tries to "save" her gay boyfriend Dean (Chad Faust) by having sex with him (which she sees as a direct request from God), things suddenly backfire. Dean remains gay, Mary becomes pregnant, and as a result, she begins to strongly question her faith.

But don’t be fooled — this is a comedy. According to Malone, though, don’t make the mistake of trying to sum up Saved! in a mere few sentences.

"That’s the worst thing you could do because the film is about so many different things. It’s a sweetly satirical comedy set in a Christian high school about a group of kids questioning their faith. So it takes more than a few sentences to describe it," Malone claims.

When Mary’s values begin to change halfway through Saved!, so do her friends and surroundings. She goes from hanging out with the trendy Christian Jewels (including her best friend Hilary Faye played by songstress Mandy Moore) to socializing with school rebels Cassandra (a loudmouthed student played by Eva Amurri who, coincidentally, is also the only Jewish kid on campus) and Roland (Macaulay Culkin), Hilary Faye’s wheelchair-bound brother who simultaneously discovers his wild side and passion for Cassandra.

"I read the script and I absolutely loved it," says Malone of Saved! "One of the first things that popped into my head was, ‘Finally!’ I had never seen issues like this in a teen film. It involves questioning beliefs, teen pregnancy; important things for people to wrap their heads around. So in those ways, it separates itself from the teen comedy genre. It’s a smart comedy," she adds, dropping in names of some other "unique and special" teen comedies of recent years, most notably the Reese Witherspoon-headlined Election.

While Malone’s character Mary undoubtedly grows up throughout the storyline of Saved!, in real life, the actress has morphed from child to adolescent to young woman in front of the eyes of a growing and committed fan base. Some of her other credits include roles in Stepmom alongside Julia Roberts, Donnie Darko and The Dangerous Lives of Altar Boys. In essence, Malone blossomed into adulthood on the big screen.

"I feel fortunate [to be doing this], although there are definitely upsides and downsides to everyone’s adolescence," Malone says. "I’ve had a lot of responsibilities and I’ve been able to have these responsibilities and freedoms because of what I do. I’ve had the opportunity to travel and meet interesting people, different types of people. And at the same time, I’ve been able to work with people who are older and who listen to what you have to say, and who allow you to make creative choices."

According to Malone, one of her criteria in picking projects revolves around wanting to portray truthful, honest, realistic characters. She says that "people seem to down talk the kids of today and don’t have high expectations of them," and, therefore, she wants to combat this by lending her talents to making good films about what teenage life is really about.

For Malone, Saved! was another opportunity to fulfill this goal and, aside from the film’s awesome content, working on the project was a very positive experience for the young actress.

"It was like a summer camp, basically," Malone says with a smile, describing the Saved! set. "You’re with six other people who are similar ages and you’re all passionate about the same things, so there’s a lot of mutual respect and thoughts exchanged. There’s no one that came to it with any kind of an ‘I’ve been doing this longer than you have’ attitude, so it was fun. I had a good time. We all just hung out for eight weeks, and it was one of the best shoots I’ve ever been on."

"It was just really beautiful — there was a lot of creative energy being exchanged," Malone adds. "It was all very talented, young professionals and we’re all kind of similar minded. So it was really a blessing."

After chatting about the film, Campus Circle wanted to know what Malone, who currently resides in her hometown of Lake Tahoe, does when she’s not working?

"A lot of my day-to-day revolves around the outdoors," says Malone, taking advantage of a town filled with tall trees and lakes. "I also have a little kitten and I spend time with my boyfriend — we just hang out a lot."

As for hobbies, Malone says she does a lot of photography and watches a lot of movies. Oh, and lest we forget, she loves "hardcore Slip ’N Slide."

Saved! releases in theaters May 28.