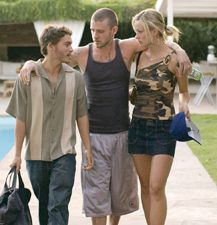 It takes a few minutes to figure out we're in crime thriller territory.

The front line characters in the weird, edgy, chaotically energetic Alpha Dog are all tattooed suburban posers in their twenties whose lifestyles feel like a nonstop house party starring the cast of “Jackass.”

The story, a fictionalized account of a real-life FBI case, arrives in bits and chunks, with pseudo-documentary “interviews,” typographical factoids appearing like subtitles, flash-forwards and new-waveish split screens. Johnny Truelove (Emile Hirsch) is a major dope dealer to the upper class whose posse of dim-bulb henchmen and suckups accept his abuse as the price they pay for a sweet standard of living.

Johnny's no valedictorian himself. Whatever he understands about running a gang seems to have come in part from his dodgy dad Sonny (Bruce Willis) and thug-posturing gangsta rap videos.

Johnny's best boy Frankie (Justin Timberlake) and resentful lackey Elvis (Shawn Hatosy) grab kid brother and haul him off to Palm Springs, where the abduction looks as though it will be nothing more serious than a weekend of pool parties. Zack actually enjoys being liberated from his overbearing mom (Sharon Stone) and treats it like a prank. The situation sours when the boy's disappearance becomes a federal case and Johnny begins hinting that a lot of problems would go away if his boys were to “grease the kid.”

Director-writer Nick Cassavetes breaks the boundaries of genre crime movies, showing us the events through a cracked kaliedoscope. Rather than turn the camera away when disaster strikes, he keeps his suffering characters in close, uninterrupted focus, pushing us squarely into their pain. The film is intricate, audacious and zany, with some scenes that play like pitch-black comedy even though they seem to be dead serious.

Timberlake delivers a knockout performance as Frankie, the affable kidnapper who buddies up with his victim, then descends into frazzled impotence as he realizes he'll have to dispose of him. You don't know what or who you're watching, and the characters themselves haven't a clue what's coming next.

Oddly enough, that scattershot aesthetic suits the grimly violent tale of a crime where nothing was planned and random events nudged the participants toward tragedy.