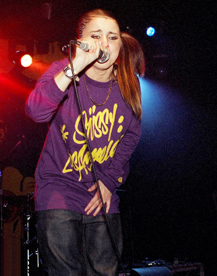 The Golden State hasn't been too kind to everyone's favorite female grime MC, Lady Sovereign. Last time, Lady Sov (a.k.a. Louise Harman) touched down in the states and into the El Rey Theatre, she battled a chest infection and by mid set she was bawling hysterically and left the stage. She never came back.

Rescheduling was set in place but even before her anticipated return to the same venue where she broke down, she was accosted the previous night in San Francisco by a donut, a rapper by the name of Jelly Donut. Who knew what was to happen next for the biggest midget in the game.

Sure the large banner of her that hung proudly was there and the opening acts played, but as the crowd waited patiently for what felt like an eternity, thoughts began to creep. Was her tour bus stuck on the 405? Had she been surrounded by a drove of teenyboppers that loved her video on TRL? Did the rapping donut return and come back for more?

Quite frankly, it was much worse. As the opening beats of “Ch Ching” ushered in the entrance of the lady, all gasped as an image of the crutches-dependent rap ingénue with her arm in a sling became strikingly apparent.

It seemed as if L.A. had again claimed Sovereign as a victim, but as the crutches dropped and a noticeable pep in her step was coupled with cheeky wit (“Ch Ching” was replaced with “Sa Sling,”) it was clear that she had finally won L.A. over.

Dame Judi Dench she is not. Gravitating on the stage with DJ Frampster and her solid rhythm section, she beer swilled, burped tremendously and screamed like a banshee.

Mindful to not actually break her legs she repeatedly tied her shoelaces, even asking a male fan to help. He did, and in return got a nice smooch on the check.

Having such innate charisma is a blessing. At only 21 years of age, Sovereign's already attracted diehard rap aficionados and moguls, the biggest being Jay-Z who signed her to Island Def Jam Music Group in 2005. Though it may not have been the constant belching that got her signature on the dotted line, the dirt-infested, though always aggressive, drum and bass beats that align with her sheer lyrical bravado did.

Club banger “Random,” proved that, as everyone in the theater got a little tipsy not by the drinks they were holding, but rather the intoxicating rhyming precision of “S-O-V,” the chant spilling from the front to the back of the venue.

Never shy, Sovereign had no problem critiquing the celebrity-obsessed culture that many of us are drawn into. While she may not be able to dance on stage like the rest of them or sport some polished nails, it's best to know that in a music genre that strives on being real, it's her lyrics that hold up and not the fake orange tan (“Tango”) that will temporarily stay.

Even worse is being vacant. Sovereign and crew obliterated that notion through the Sex Pistols classic, “Pretty Vacant.” Sov's rotten screech returned establishing that – if she wanted to – she could moonlight as a punk rock princess.

Biggest midget in the game will have to do for now. Judging by the reaction of her infectious single, “Love Me or Hate Me,” that's all her fans really want anyway.

Hundreds of them proudly flashed the middle finger just like her. Tonight, it was a sign of love. —John Barundia