A Change of Scenes: Late Winter and Spring Films Fill a Void 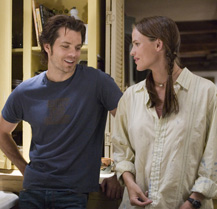 Normally, movies scheduled for the first months of the year are like stand-ins at a Broadway musical, waiting for the stars to lose their voices so they can have the stage – that is, they're ready to fill the multiplexes soon as interest wanes in the big holiday pictures. Nonetheless, there are still a number of high-profile movies coming up in the mix.

Nick Cassavetes' suburban crime drama is a combination of public record and speculation about the kidnap and murder of a 15-year-old boy by a drug gang. With Justin Timberlake, Ben Foster, Sharon Stone, and Bruce Willis.

STOMP THE YARD In theaters

A troubled youth from L.A.'s South Central is shipped to a black university in Atlanta, where his angry attitude is eroded away by life in a frat and a dance competition. With Columbus Short, Megan Good, Chris Brown.

Sean Bean takes over for Rutger Hauer in this remake of the 1986 thriller about a serial killer who stalks the rural highways with his thumb out.

Anthony Minghella wrote and directed this intimate urban drama about a London architect (Jude Law) who begins an affair with the widowed mother (Juliette Binoche) of a Bosnian teen who burglarized his offices. Complicating things is the architect's problems at home with his girlfriend (Robin Wright Penn) and her 13-year-old daughter.

Always a welcome sight to my eyes is a traditional Western, and this sounds like something Clint Eastwood would've made three decades ago. Taking place after the Civil War, it stars Pierce Brosnan as a man on the run from a pack of bounty hunters led by a fiercely determined, grudge-holding Liam Neeson. With Angie Harmon, Anjelica Huston.

Romantic comedy starring Jennifer Garner as a grieving woman who discovers that her dead fiance was leading a secret life, and that his best friend (Timothy Oliphant), whom she'd found disgusting, is the key to her future happiness. Directed by Susannah Grant (writer of Erin Brockovich ).

Spoof of big-budget blockbusters like Superman Returns , The Chronicles of Narnia , and Pirates of the Caribbean written and directed by two of the six writers of Scary Movie . With Fred Willard, Kal Penn.

BECAUSE I SAID SO Feb. 2

Diane Keaton is a mother trying to save two daughters (Lauren Graham, Piper Perabo) from the troubles she's known, while trying to find the right man for her youngest (Mandy Moore) by advertising in the personals. Seems like Mom has a lot to learn.

Think of it as “Little Amityville House on the Prairie.” A city family moves to a sunflower farm in North Dakota and spirits of past occupants await them. With Dylan McDermott, Penelope Ann Miller.

Michael Vartan (“Alias”) and Aussie actress Radha Mitchell are up the Black Lagoon without a paddle in this horror thriller about an African tour boat besieged by a giant crocodile.

In this prequel, we learn about Hannibal Lecter's early years in the mountains of Eastern Europe that shaped his precise interests and, uh, tastes. With Gaspard Ulliel as Hannibal. Directed by Peter Webber ( Girl with a Pearl Earring ).

A washed-up '80s pop star (Hugh Grant) is given a chance to write a song for a teen sensation. The bad news: he only writes music, not lyrics. The good news: he has just met Drew Barrymore, as a natural lyric machine. The casting seems perfect for the material.

The first big action film of 2007 cost $120 million and stars Nicolas Cage as Johnny Blaze, a stunt motorcyclist whose soul is taken over at night by a flaming skulled vigilante named Ghost Rider. To shake his curse and reclaim the love of his life (Eva Mendes), Johnny battles Satan's spawn. The Marvel superhero movie was written and directed by Mark Steven Johnson, who also did Daredevil .

Ryan Phillippe is an FBI agent given the assignment of spying on his own boss, Robert Hanssen (Chris Cooper), the real-life FBI counter-spy convicted of selling U.S. government secrets to the Russians. With Laura Linney.

Joel Schumacher directs this psychological thriller about a man (Jim Carrey) who becomes obsessed with a book titled The Number 23 and with the number itself, which he believes is leading him to some fated act of violence.

Hostage thriller starring Elisha Cuthbert and Daniel Gillies as a couple who awaken in a cellar, not knowing how they got there or why. Written by veteran frightster Larry Cohen ( It's Alive ) and directed by the usually serious Roland Joffe ( The Killing Fields ).

Samuel L. Jackson is a Southern bluesman who finds a young woman (Christina Ricci) on the road and chains her up in an attempt to drive the sins out of her. With Justin Timberlake. Directed by Craig Brewer ( Hustle & Flow ).

Billy Bob Thornton is a former NASA astronaut who takes time out from his second career as a farmer to build a rocket ship in his barn.

The movie from the Comedy Central show about goofball cops in Reno takes place at a police convention that's disrupted by springbreakers and terrorists.

How do you make a satisfying thriller about a serial killer when the killer is never caught? We'll see with David Fincher's adaptation of the nonfiction best seller by San Francisco Chronicle reporter Robert Graysmith, who became the leading authority on the man who calls himself Zodiac. Jake Gyllenhaal is Graysmith. With Robert Downey Jr., Mark Ruffalo. At least it's prime territory for Fincher ( Seven ).

Four suburban buddies (John Travolta, Tim Allen, Martin Lawrence, William H. Macy) get themselves some leather jackets and Harleys and hit the road. Complications ensue when they accidentally blow up the New Mexico bar where the Del Fuegos biker gang hangs out.

Zach Braff stars in this comedy about an upwardly mobile ad man whose satisfying work and happy marriage are threatened by his wife's competitive, wheelchair-bound childhood friend. With Amanda Peet, Jason Bateman.

REIGN OVER ME March 9

Adam Sandler stars as a man who's lost his family to a tragedy in Mike Binder's drama of depression and the healing power of friendship. When Sandler runs into his college roommate (Don Cheadle), he clings to him like a life vest.

Adapted from Frank Miller's graphic novel and directed by Zack Snyder (2004's Dawn of the Dead ), this is an epic re-enactment of the 480 B.C. Battle of Thermopylae, where a relative handful of Greeks blocked a mountain pass and delayed the invasion of a million Persian troops. With Gerard Butler. The flashy visuals look like Sin City meets Gladiator .

I THINK I LOVE MY WIFE March 16

Chris Rock directed and stars in this domestic comedy about a happy but bored married man who starts to question his reasons for fidelity when he gets a visit from a sexy ex. With Kerry Washington.

Like Groundhog Day , only not funny, this psychological drama stars Sandra Bullock as a woman who keeps reliving her husband's death in a car crash due to his reappearances. With Julian McMahon.

Mark Wahlberg, hot off The Departed , stars in a political thriller about a former Army sniper who is framed for an assassination attempt on the president. Antoine Fuqua directs.

Eric Bana is a compulsive gambler and social wreck trying to get himself under control for a high-stakes Las Vegas game of Texas Hold 'Em in which he'll have to face the best player in the game – his father (Robert Duvall). With Drew Barrymore. Directed by Curtis Hanson.

Fifty years in the future, a space crew races toward the dying sun to deliver a payload of energy into its core, rekindle its power and save the solar system. With Chris Evans, Cillian Murphy.

THE PLEASURE OF YOUR COMPANY March 16

Slapstick romantic comedy about a lovelorn loser (Jason Biggs) who impulsively proposes to a waitress (Isla Fisher), who's such a mess herself, she accepts. Could be a grown-up American Pie .

David Zucker directs his comic aim toward Spider-Man, the Fantastic Four and other superheroes of the big screen.

Sports comedy in which a college football coach (David Koechner) with a lousy win-loss record and a mismatched bunch of recruits vows to turn the program around.

Computer-animated feature from Disney about a young science whiz who travels into the future, where he meets a family that needs him desperately. With the voices of Angela Bassett and Tom Selleck.

Horror thriller about a lapsed missionary (Hilary Swank) who travels to the swamps of Louisiana to quash rumors of supernatural phenomena and is soon convinced they are a repeat of the Old Testament's 10 plagues.

Will Ferrell and Jon Heder are rival figure skaters who, after being banned from singles competition for brawling during a world-championship event, decide to make their way back into the sport as a pairs team. With Craig T. Nelson.

Christian Bale is Dieter Dengler in Werner Herzog's docudrama about the German-American pilot who, after being shot down and captured during the Vietnam War, led a POW escape. With Steve Zahn, Jeremy Davies.

A rich kid (Anton Yelchin) enrolls in a new school, where he becomes acting shrink to the student body.

Lasse Hallstrom's comedic treatment of Clifford Irving's spectacular scheme to peddle an “authorized biography” of Howard Hughes in the 1970s – while Hughes was still alive and in no mood to cooperate. With Richard Gere.

Quentin Tarantino and Robert Rodriguez team up for this double-feature homage to the days when exploitation films knew what they were doing. Tarantino wrote and directed Death Proof , starring Kurt Russell as a serial-killer stunt man; Rodriguez wrote and directed Planet Terror , in which a babe with a machine gun for a leg helps defeat an army of zombies.

Jake Kasdan wrote and directed this parody of the humiliating process of getting a TV show on the air. With David Duchovny as a man with a pilot and Sigourney Weaver as an exec with balls.

Special Features
Will Smith is banned for 10 years from academy events, including the Oscars
240 views

Special Features
The future of Gotham? 10 actors we could see as Batman
467 views