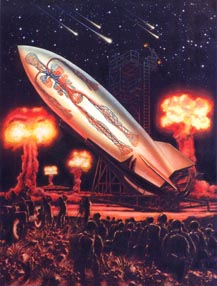 Falling asleep after watching an episode of “Leave It To Beaver,” your nightmares may manifest themselves as a Dennis Larkins painting. What have now become the archetypes, if not myths, of the 1950s – clean cut boys in suits and smiley faces, firehouse-red tin toys, bulbous-headed pea-green Roswell aliens – fill Larkins' canvas like a snapshot of nighttime mental indigestion.

The 1950s work would have generated a more visceral response if displayed in the era it seeks to subvert – the hegemony of 1950s wholesomeness. However, when Larkins takes on symbols of recent eras – Pac-Man and the misses flying a fighter jet with a mushroom cloud in the background in Playing the Nuclear Option – the work seems to trade in its cultural references for vapid pop iconography.

In Nuclear Option what, exactly, are we supposed to extrapolate? Of course the 1980s saw us on the brink of nuclear annihilation – but is this what Larkins is trying to say? If so, it's been said more ingeniously than the artist does here, with deeper depth than that the option is a game ( Wargames , anyone?) More insightful is Anatomic Bomb in which an army unit, mushroom clouds in the near distance, gather around a missile with the veined shadow of a human painted on its side.

You know Larkins' work from Disneyland. Seriously. He designed a number of the floats while employed in the Disneyland Parade Float Shop as well as photo kiosks for Tomorrowland, EPCOT and a Minnie Mouse one for the Toontown Mall Tour. Also on his resume are Grateful Dead handbills from the '80s, set designs for the Days on the Green music festivals in the '70s and the Warner Bros. Studio store design in the '90s and today.

It is an amalgamation of his two- and three-dimensional background found in Larkins' “dimensional paintings” in which various pieces of the mise-en-scène slightly push off from the canvas as he incorporates various space-age material (e.g., plastic) to enhance spatial awareness. The Mysterious Hand , the title of one his works, is no doubt his own.