Jump on the: Head Band Wagon 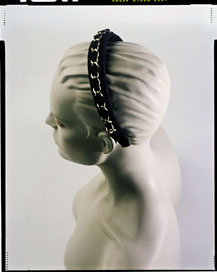 Politics and the fashion industry have more in common than you might think.

For starters, they're both cutthroat businesses populated by egomaniacs whose success depends on public opinion.

And in fashion, just like politics, a week is a lifetime and a month is an eternity. One day you're way up (in the polls or the style buzz) and then, like that, you're zip, nada, zilch.

That said, it's not often that politics and fashion collide as they did in this one thing: the headband. When her husband first ran for president in the early '90s, Hillary Clinton was pilloried for being a yuppie, preppy harridan. The black headband she wore somehow came to symbolize all that.

That's a big message for a skimpy hunk of velvet. But it wasn't lost on the ambitious Clintons. Hill promptly lost the headgear and Bill became president.

What a difference a decade (and a half) makes. Now Hillary Clinton is a possible presidential contender herself. And the headband is back in style.

It's no longer a symbol of liberalism or all that is wrong with womanhood. Now it's the height of chic. Chanel and other high-end fashion houses have shown headbands on the runway.

A Patricia Underwood number costs $230 at Neiman Marcus. Clearly, on the headband front at least, Hillary peaked too soon.

Is the renewed popularity of the once-reviled headband a sign that – finally – women in political life will be judged on the content of their minds not the quality of their wardrobes?

No and yes. In her recent race for re-election to the U.S. Senate from New York, Clinton's opponent didn't bring up her former headband use or criticize the dark suits and bright blouses she favors on the campaign trail.

He just called her ugly.