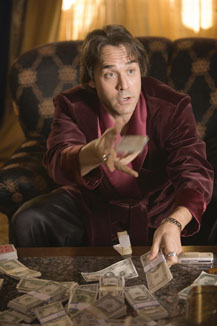 For actor Jeremy Piven, in a career in which auditioning “for the abrasive best friend for the 116th time” was all that was usually available to him, this was the role of his dreams.

For writer/director Joe Carnahan, Piven was an actor “who would always shine, even in movies that may have been uneven.” When they met to discuss Carnahan's planned movie, “I thought, ‘This is the guy.'”

The movie is Smokin' Aces , and Piven's character, Buddy “Aces” Israel, is about to get smoked by any of a large number of potential hit men and hit women. That's because Buddy, a top-notch Las Vegas performer with mob connections, decided to become a mobster himself, angering his old mob friends – in particular one Primo Sparazza, who's put a $1 million bounty on his head – and has gotten the attention of the FBI, which wants to protect him so that he can testify against the mob.

Piven and Carnahan are sitting together, relaxed and trading jokes, compliments and insights. Neither looks much like we've seen them lately. Piven is scruffy and unshaven, presenting a much looser and softer image than the slick, sharklike Hollywood agent he plays on HBO's hit comedy “Entourage,” a role that last year won him an Emmy Award for best supporting actor. Carnahan, despite his usual black T-shirt and jeans, now has hair covering his formerly shaved head and a full beard.

Carnahan's movie came at a particularly fortuitous time for the director, who previously made the low-budget Blood, Guts, Bullets and Octane (1998) and Narc (2002). Carnahan had just stepped aside as director of Mission: Impossible III . Free from making what he calls “a big Hollywood film I probably had no business even entertaining,” Carnahan returned to finish a script he had sold to Working Title Films at the time he took Narc to the 2002 Sundance Film Festival.

His story was based on his fascination with Frank Sinatra, particularly the singer-actor's relationship with the mob.

“What if a guy like Sinatra decided one day,” Carnahan says, “‘I don't want to be in league with Sam Giancana; I want to be Sam Giancana.' How would he parlay his considerable success as an entertainer into a criminal venue? That was the basis for Buddy Israel's character.”

Carnahan decided that he didn't want to tell the “ascent story” of Buddy's character, since that had been done. “I was more fascinated with the end of something, when somebody has reached that apex, and then the decay as they begin that slide down the slope.”

As a result, Carnahan quickly tells the story of Buddy's rise through a bravura montage sequence that shows Piven performing before a packed Vegas showroom (he's a magician who also tells jokes and plays the drums), hanging out with mobsters and becoming a crime boss himself, ingesting inordinate amounts of cocaine, getting busted, crashing and finally hiding out in a South Lake Tahoe hotel suite.

For Piven, this was the kind of role “you work for your whole life,” he says. It's been an acting life that has found Piven appearing frequently in character roles on television (“The Larry Sanders Show,” “Ellen,” “Cupid”) and in movies that are funny ( PCU , Old School , Keeping Up With the Steins ), dramatic ( Blackhawk Down , Runaway Jury , Two for the Money ) and both ( Grosse Pointe Blank ).

“The wonderful, enticing and really juicy challenge of this role,” Piven says, “is to give the guy a heart ... a character who is tragic and has dimension and is accessible, even though you're catching him at the last part of his life while he's slipping down ... He's so unbelievably tragic and kind of Shakespearean in a way.”

Two of the more interesting characters in Smokin' Aces are played by music stars making their acting debuts.

“[He] has a very rare presence, has so much weight and is so dangerous, yet is so filled with love,” Piven says. “You can't direct or teach that. You can't teach cool.”

Carnahan credits the success that Common and Alicia Keys, the nine-time Grammy winner who portrays hired gun Georgia Sykes, have in his movie to their working with pros such as Piven and Henson, who plays Keys' partner in crime. (Henson is the critically acclaimed actress from Hustle & Flow who sang the Oscar-winning song “It's Hard Out Here for a Pimp” at the 78th annual Academy Awards.)

“Alicia and Common,” says Carnahan, “acquitted themselves so wonderfully because they had the people across from them giving them the energy, giving them what they needed.”

Although Smokin' Aces is nearly two hours long, most of the concurrent events take place in just 25 minutes. Consequently, Carnahan's movie is tightly edited, with rapid-fire cutting and overlapping dialogue that transitions from scene to scene.

Piven praises Carnahan's precision and professionalism: “Joe is one of these guys who knows exactly what he wants. You see his storyboards ... he's not unlike the Coen brothers in knowing exactly where he wants to go with the movie, yet open to collaboration at the same time.”

Such collaboration can be seen in the amount of improvisation Carnahan allows – even demands – of his actors, even though his movie is scripted with frequent zinging one-liners.

Following his promotional tour for Smokin' Aces , the next thing Carnahan will be working on is a remake of Bunny Lake Is Missing , the 1965 thriller directed by Otto Preminger. Reese Witherspoon will star, and Carnahan will direct and has co-written the screenplay with Doug Wright ( Quills) .

At the end of 2007, Carnahan plans to direct White Jazz , starring George Clooney and based on a novel by James Ellroy, with a screenplay by Carnahan and his brother, Matthew Carnahan. He hopes to attract Piven to the cast “in that little freak show.”

As for Piven, he just finished making The Kingdom , an action-thriller set in Saudi Arabia, directed by Peter Berg and co-starring Jamie Foxx, Chris Cooper, Jason Bateman and Jennifer Garner. The script is by Matthew Carnahan, provoking Piven to joke, “I have a new rule: I only work for the Carnahan brothers.” Piven also says he's just about to start work on the fourth season of “Entourage.”

Carnahan and Piven finish the interview with some final thoughts about the film on which they collaborated.

“ Smokin' Aces is exactly the movie I wanted to make at exactly this time in my life,” Carnahan says. “I am absolutely fulfilled artistically.”

To which Piven adds: “It's a rare combination where we're all doing it because we love it.”