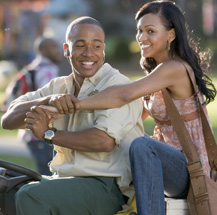 Stomp the Yard opens with a furious and dizzying competition between rival dance outfits. Like a hip-hop version of the Jets and Sharks from “West Side Story,” the boys speak with their bodies. And the message is clear: Move over, chumps, because we're badder than you.

Lively enough during the musical sequences, the movie comes to a standstill during the dramatic ones. Here the teenage DJ (Columbus Short) feels guilty about the death of his younger brother, who was killed on the walk home from the dance-off.

Transplanted from the mean streets of Los Angeles to ivy-covered Truth University in Atlanta, DJ naturally feels out of place. But when he sees fraternities recruiting across campus with military-precision dance routines (they call it stepping), he figures he might belong after all.

He also wants to impress April (Meagan Good), even though her boyfriend Grant (Darrin Henson) is the reigning cock of the walk at the annual college stepping contest. DJ's decision now becomes easier as he decides to pledge at a frat where he can teach a group of underdogs some fresh moves.

Short and Good enjoy some decent chemistry despite their limited acting chops. His transformation from hate-the-world street kid to professional student is solely in service of the script.

Good looks great but shows her true abilities in stilted scenes with her daddy (Allan Louis), the university provost who disapproves of DJ and tries to get him thrown out of school for lying about his arrest record.

Though threatening throughout, the movie turns to sap when DJ makes a pilgrimage to the campus' Heritage Hall. Here the framed photos of Rosa Parks, Martin Luther King Jr. and Esther Rolle remind him that he is not alone in his struggle.

Are the dancers at least amazing? It's hard to say because novice director Sylvain White never gives us a decent look at them. It's hard to see much when shots are delivered like lightning flashes. The camera stops long enough only at the end of a routine (the silliest part), where DJ's crew is usually poised like striking cobras.

At nearly two hours, Stomp the Yard would have been easier to watch if it had sped through the drama and paused more for all that fancy footwork.