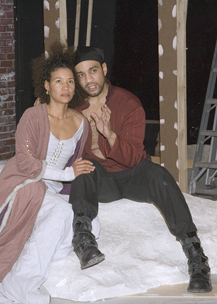 This is the problem with producing any of William Shakespeare's amusing comedies or insightful tragedies: how to tell the same story without coming off as repetitive or boring. Many theater enthusiasts have seen the plays done the way the Bard had originally intended. In this millennium, producers and directors have to think outside the restrictive box in order to attract and connect with audience members.

This production of “Macbeth” does that perfectly. Actor Harry J. Lennix (“Commander and Chief”) knew this when he and his colleagues, Lamont Johnson as the doomed Banquo and the sponsoring theater company Blue Panthers Inc., decided to put on a fresh production about the paranoid Scottish king.

For one, it's an entirely all African-American cast. Normally, we would have to wait for another production by the late August Wilson to see some light, dark and in-between shades of black in both the major and minor roles of a play.

In this show, the only hint of vanilla (although, never seen on the stage) is director Steve Marvel. Now that's a huge change.

Marvel, a Northwestern University graduate like Lennix, was chosen for his classical acting training and deep understanding of Shakespeare's extensive body of work. Just like Lady Macbeth and her husband, it was a perfect pairing.

Why an all-black cast? Why the hell not? Wilson only wrote so many plays that black actors and actresses could be apart of.

“Macbeth” is all about what happens when ambition and power supersede the original goal: providing aid to everyone – no matter what class – in need. History documents that having sovereignty can blind the eyes of leaders whose desires becomes muddled and disjointed. The aftermath of Hurricane Katrina unmistakably made that point when long-time New Orleans residents waited what seemed forever to receive help from the government.

Other than “The Tragedy of Othello: The Moor of Venice” and one of Portia's nebbish suitors in “The Merchant of Venice,” African-Americans are almost never seen. Marvel and Lennix's vision of the tragedy makes great headway in adding color to a classic.

As the power hungry, but troubled with guilt Macbeth, Lennix is phenomenal to watch. He moves around the stage with controlled fury and gives the Thane layers of emotions and characteristics ranging from arrogant soon-to-be-king to vulnerable prey of his wife.

Only a strong-willed woman can hold her man down while keeping an eye on the main objective. Patrice Quinn is deliciously evil as Lady Macbeth. She's what they call a ride-or-die chick in hip-hop culture.

The ravenous couple feeds on each other's hunger and acts as one another's life support. At the same time, however, Lady Macbeth still maintains her individuality.

Besides Quinn, a dynamic cast surrounds Lennix. Ahmad Jackson has various personalities: he is Duncan's son Malcolm, one of the murderers who kills Banquo and has the awful duty in telling Lady Macduff her husband “died.”

The one person who wins at playing an assortment of characters without losing a step, a line or their mind is Erica Tazel. Let me tell you about Miss Erica. She is probably an inch or so taller than rapper Lil' Kim and has enough talent fill the Lillian Theatre on her own.

She plays the Witch who tells Macbeth and Banquo their futures, which starts this whole bloody mess in the first place. She's also Lady Macduff, a soldier and a servant to Lady Macbeth who slowly descends into madness. Dramaturge Geoff Callaway isn't present on the stage, but his gallant and strategic sword-fighting represented him marvelously. All the action, murder and betrayal of Shakespeare's tale come to life on the Lillian stage, and Lennix owns it.