The Party's Over: When the Hangover Begins 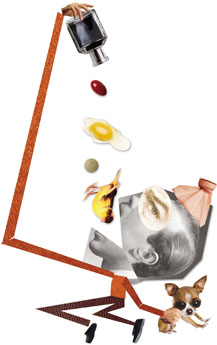 Your hair hurts, your mouth feels as if you've eaten steel wool, your stomach is angry at you and you can't see across the room. The only good news is that you recognize the person sleeping beside you as your significant other.

This is a hangover. You drank too much, and now you're paying for it.

The only time-tested method is to take a couple of aspirin or ibuprofen (Motrin, Advil), drink a lot of water, fruit juice or something such as Gatorade, then get some rest and wait for the effects to go away, says Dr. Charlene Prather, associate professor of internal medicine at St. Louis University School of Medicine. Anything to get the water back into your system and to replace the nutrients (electrolytes) that the alcohol drained away.

She can give some specific medical advice: Do not take Tylenol, she warns, because its reaction with alcohol residue in the liver can be toxic.

Still, she says, “The science is very limited. Even the aspirin and ibuprofen don't have randomized control trials.”

Scientists pay little attention to the hangover. Doctors and researchers see it as a symptom of drinking too much, not an illness in itself.

“The hangover is still a mystery to scientists,” says Erin Hunt-Carter, a clinical psychologist and doctoral candidate at the University of Missouri at Columbia. “We know that heavy drinking may lead to headache, fatigue, thirstiness, gastrointestinal distress and other assorted unpleasantries.

“But we don't really know why this happens or why some people report being hangover-prone and others hangover-proof.”

Hunt-Carter is writing her doctoral dissertation on hangovers and alcohol abuse.

She is tackling the subject because no one else has.

“Scientists have not yet identified the exact mechanisms that lead to the misery of hangover,” Hunt-Carter says. “We know that people increase their risk of hangover with each drink, so heavy drinking is especially likely to produce a hangover.”

Prather says, “It's not what you drink but how you drink it. If you drink to intoxication, you are likely to get a hangover.”

Here's who experts and bartenders say are more likely to get hangovers:

–People who party and drink several days in a row.

–People who switch among types of drinks during an evening.

Another mystery is the source of the pain from hangovers.

Anecdotal evidence blames dark liquors such as whiskey and red wine. The impurities in the color may have a toxic effect. That's why clear liquors such as vodka and white wine aren't as famous for causing hangovers.

“It may be a form of withdrawal,” Prather says. “But it may be because things in alcohol are toxic.”

She suspects the dehydration from drinking too much is the big culprit. “Alcohol is a diuretic, and it causes a lot of urination,” she says. The symptoms of a hangover mimic those of severe dehydration.

Also, Prather says, the pain could come from constricted blood vessels or inflammation of something in your head. That's why aspirin and ibuprofen work.

The other way a hangover can hurt is by signaling that you may be heading for a 12-step program, especially if you're experiencing blackouts.

Prather loathes the binge drinking in colleges. Many students think they have a hangover when they actually suffer from alcohol toxicity; their body is being destroyed by too much alcohol. Alcohol is a depressant, and too much can shut down your system and kill you.

A new rave among the 20- and 30-something crowd is over-the-counter pills. While they've been around since the mid-1990s, about two-dozen have popped up in the past two years.

Mike Pearson, co-founder of HangoverReview.com, and his associates tested more than 50 of the pills and concluded the newer pills are versions of the old pills. Some work best by taking one before going to bed, others by taking one or two between drinks.

While Pearson lists the most effective over-the-counter hangover remedies, only one, Alcohol Hangover Relief, claims to work after a night of drinking. The others are preventative – a little late for the day after the party.

The more experienced set, including Mark Pollman, a freelance bartender, author of books about bartending and spirits and member of the Bartender Hall of Fame, has less high-tech advice.

“I would say, ‘Don't drink too much in the first place,'” Pollman says. “If you do, put something really nice and greasy in your stomach before you start.”

He suggests sleep as a remedy unless the beverage of choice is wine, in which case he recommends drinking water before going to sleep.

“Take a couple of aspirin and go back to bed,” he says.

“But know that drinking is fun, a wonderful thing, as long as you're in control. When it starts controlling you, then you have a problem.”