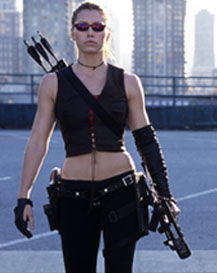 Jessica Biel and Ryan Reynolds liven up Blade: Trinity, the third installment in the successful vampire series, with an entertaining blend of humor and action. Directed by David Goyer, who wrote all three Blade movies, the film opens Dec. 8.

Biel and Reynolds play members of the Nightstalkers, a group of human vampire hunters who come to Blade’s rescue when he’s captured by the FBI. Wesley Snipes reprises his role as the day-walking vampire hunter, with speculation as to whether he will return for Blade 4 or a Nightstalkers spin-off. Biel and Reynolds are both signed on for a spin-off, but only if Goyer is at the helm as director.

Both Biel and Reynolds beefed up their bodies for the demanding roles. "I was in the gym six days a week for a couple of hours a day," followed by "an hour of fight training, an hour of archery and a super-strict diet throughout the whole movie," Biel says.

"It was intense," adds Reynolds, who put on over 20 pounds during filming. "I’d do two hours of weightlifting a day and then an hour of fight training. Then [I’d] go shoot for 15 hours."

Wesley Snipes stayed in character during the filming of Blade: Trinity, which Biel and Reynolds used to their advantage.

"He was just serious, very intense and quiet – not really communicative at all. It was weird, but it really helped our dynamic onscreen," says Biel, who plays Whistler’s daughter, Abigail, in the film.

"We are contentious to begin with, our characters," says Reynolds, who plays the wisecracking Hannibal King, and rubs Blade the wrong way from the start. "We’re fighting on the same side against a common enemy but we’re adversaries as well, so it really helps. The less he gives me when I’m popping off, the more it feeds me, the more it inspires me."

Biel and Reynolds also performed most of their own stunt work and fight scenes in the movie.

"I mean this with some humility, but we got in such [good] shape that they couldn’t find stuntmen that looked like us – Jessie or I – so we just did them," says Reynolds, who is thrown around by wrestling star Triple H in one climactic scene.

It’s an experience he recommends. "It’s fantastic. Very character building for one, very painful for another," says Reynolds, displaying the same smart-aleck humor he used to play Hannibal King.

Biel took one fight scene a bit too far, though, and accidentally popped actor Jordan Hoffart in the face.

"It’s the first scene where you see me and I throw [Hoffart] on the ground and I’m punching him like this and I just collided with his face. His head hit the concrete," says Biel, adding that she then rushed over to the monitor to watch the footage with Goyer. "We just watched it over and over … and Jordan was such a good sport. I could see him; he was like, ‘Oh, I’m totally fine,’ but he was rubbing his chin."

But this wasn’t Biel’s only accident. She also busted a $300,000-plus lens when she shot an arrow through it while filming the movie’s ending.

"I’m up 40 feet away from the camera [and] they’ve put this plexi-glass [up] to block anybody from getting hurt,’" Biel recalls. "The problem with my bow is they’ve turned down the poundage. If it was turned up to normal pounds, I could shoot that arrow straight, probably for 100 yards, but instead the arrow kept falling short.

"My coach said, ‘Either turn it up or let her aim for the camera,’ because I was aiming just off. All the guys were like, "Just aim at it," and my coach was like, ‘Do it, do it,’" she adds. "I mean, we had been practicing hardcore target practice and I just aimed and shot that lens right out. First take."

There’s a chance the footage will be on the DVD. "It’s a cool shot," Biel concludes. "What I saw I hope they put in the DVD; I think the fans will love it."