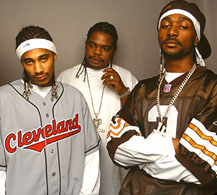 It's been more than 12 years since Eazy-E discovered Bone Thugs-N-Harmony and unleashed a new form of hip-hop music on pop culture.

Somewhere along the way, between writing their Grammy-winning tribute song “Tha Crossroads,” selling nearly 30 million records and recording a star-studded potential comeback album due later this year, the Cleveland hip-hop crew got a call from Sean “Diddy” Combs.

It was the late '90s, and Puffy's star artist, the Notorious B.I.G., had met the group at a party in New York and wanted them on his next album, says founding member Layzie Bone.

Bone Thugs headed to California to contribute to one of Biggie's last classics, “Notorious Thugs.” And though they recorded the song in Los Angeles, Layzie can't remember many details from the sessions.

“A lot of Hennessy and heavy smoking in them days,” he says by way of explanation.

The past may be hazy and it's been five years since the group released a major-label record, but Bone Thugs have a clear path mapped out for the future.

In late March, they plan to release a new CD – Strength and Loyalty – featuring a cast of super producers and heavyweight guest stars.

“We believe it's going to be the biggest album to date,” Layzie says.

Don't scoff. Bone Thugs never blew their credibility, keeping a loyal fan base built on their melodic but gritty early albums. One member, Krayzie Bone, is up for two Grammys this year for his appearance on Chamillionaire's summer anthem “Ridin'.”

Most importantly, the group is now signed to Interscope Records, a juggernaut among hip-hop labels and the home of Dr. Dre. (Bone Thugs have a joint deal with the company through producer Swizz Beats' Full Surface label.)

Though known for their collaborations with late rap legends – Biggie, Tupac and Eazy-E – Bone Thugs never released an album with as many star collaborations as the upcoming disc, Layzie says.

Jermaine Dupri produced a song featuring Mariah Carey, which could be an early single, while other tracks feature the Game and Petey Pablo.

According to publicists at Interscope, Dr. Dre isn't producing any of the new songs. But Layzie says Kanye West, will.i.am (a member of the Black Eyed Peas and a driving force behind Fergie's hit singles) and reigning R&B champ Akon all contributed tracks.

Meantime, the group tours seven to eight months a year. At their live shows, Layzie says, expect old classics such as “Tha Crossroads” and “1st of Tha Month,” as well as songs from the new album and everything in between.

Bone Thugs has included as many as five members but now performs as a trio. One member, Bizzy Bone, is out of the group, while another, Flesh-N-Bone, is locked up. Still, Layzie says all the members are on good terms and that he looks forward to a reunion someday.

“Everybody's still cool,” he says. “You know, we just grown men and we got different business endeavors that we tend to, but you know we all keep it true to Bone Thugs-N-Harmony.”

The group formed in Cleveland in the early 1990s. Its trademark sound is a harmonic, rapid-fire combination of rapping and singing that sounded like nothing else in music when 1995's E. 1999 Eternal hit No. 1 on the Billboard albums chart.

Layzie says the members cultivated that style growing up together.

“Our mothers sing. My mother sings, Krayzie's father sings ... the harmony, you know, it was eventually mixed with the rap because we was into the rap but we had always sung back in the days.”

Between 1994 and 2000, Bone Thugs released four platinum or multiplatinum albums. They eventually left Eazy-E's Ruthless Records but continued to release albums, both as a group and as solo artists.

Then Interscope came calling, setting the stage for another potential breakthrough year and signaling that the group's biggest hits aren't necessarily all in the past.

The band will perform Jan. 25 at Henry Fonda Theater in Hollywood. For more information, visit www.bonethugsnharmony.com.