Dustin Kensrue: Hard Rocker Will Make You a Believer 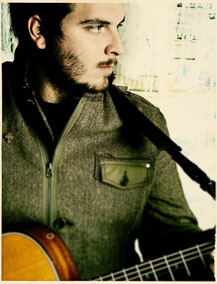 Dustin Kensrue has got a pretty big voice, one of many things to his credit. As a professional musician, he's never shied away from being outspoken on what he believes in and as the frontman for Thrice, he's got vocal chords that could, pardon such early lyrical word plays, make the earth shake.

So why is it that his most honest effort yet could be void of the sweeping aural landscapes and epic storytelling that have long been his signature style?

“I just think it's a really fun record to listen to,” Kensrue says matter-of-factly about his debut solo album, Please Come Home . “It sounds kind of lame but I want people to come away from it with a smile. I think sometimes that the Thrice stuff, while hopeful, is pretty dark. I definitely feel that there's a joy to this record,” he adds.

Please Come Home marks the culmination of at least three years of on-again-off-again writing for Kensrue while he balanced his duties to his band as well as those to his family. Currently writing with his Thrice band mates for their follow up to 2005's Vheissu and adjusting to fatherhood with his seven-week-old daughter, Kensrue knew there would never be a perfectly opportune time to make, release and promote a solo album. But, that wasn't about to stop him from doing it anyway.

“I realized last summer while I was touring with Thrice that if I don't do this when I get home, it's going to be forever before I get these songs out,” he says. “I just decided it was now or never.”

While he doesn't plan on making his solo work his primary project just yet, Kensrue hopes he can reach new audiences by showcasing his folk and country-inspired roots.

“I definitely wanted to achieve a different kind of success than with Thrice, if possible,” he says. “As far as mainstream, I don't know if it will go there for being such a raw production. There are songs, which I feel could have been radio singles had they been approached in a more polished fashion, but I didn't want to go that route. Not that I would be bummed to be played on the radio, but I hate polished folk or country songs.”

Though Kensrue admits that his raw, stripped-down approach to recording the album didn't push his vocal limits like other albums he's worked on, he's confident this collection of songs maintains the emotional honesty that is his stylistic trademark.

“It's an exposed feeling,” he says, “but I think there's definitely a power to being candid. A lot of the songs are not biographical, but there are elements of my life that are woven through them. I think it's a challenge to do that and to do it well, but hopefully I'm getting close to that.”

Citing the album's closer, “Blanket of Ghosts,” as one of his more personally meaningful tracks, Kensrue explains the greater meaning behind the metaphor-heavy song. Quoting the line “I want to kiss your lips but I kiss your cheek” as an example, he explains, “It's about the constant frustration of wanting to do something right and just finding yourself blowing it. My life isn't in disarray or anything, but there's always something better that you want to be doing.”

One of the main thematic elements of Please Come Home is indeed Kensrue's spirituality and how it relates to the existential dilemmas of everyday life, as best summed up by the track “I Believe,” which is another of his favorites on the album.

“I think the message that I put across in ‘I Believe' is a pretty important one, at least for anyone like me who feels like they have to have the answers for everything,” he says. “I kind of learned the hard way that you are never going to know everything, you're never going to have all the answers and in the end you have to let your heart guide you at a certain point.”

As Kensrue has discovered with this album, though, sometimes life calls for a leap of faith. “I knew there would be some people who appreciate Please Come Home and some people who would never really give it a chance – similar to when Vheissu came out” he says. “I knew that going into it, and the feedback that I've gotten so far has ended up being more positive than I expected. When I feel good about a project, all the other worries kind of go out the window.”

And sometimes, that's all it takes for the rest to fall into place. Simple as it may sound, Kensrue sums it up best when he says, “What will be, will be.”