Of Montreal: Agony in Oslo 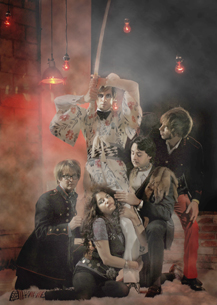 Kevin Barnes is self-conscious. Under that exquisitely tailored white kimono and ample amounts of glitter, is a man who more or less was insecure in high school.

“I've always had that sort of problem [being self-conscious],” says the creative force behind the indie pop outfit Of Montreal. “It's not as bad as it used to be. Things are becoming successful. Getting that affirmation from the world makes me feel a bit more confident. When I was in high school, I always felt like a freak. Being a freak is cool if you got company.”

The freak flag has undoubtedly flown high for Barnes and his company of skilled musicians (Jamey Huggins, Matt Dawson, Bryan Poole and Dottie Alexander) during their massive trek across the U.S. in support of their new record Hissing Fauna, Are You The Destroyer?

The image of the socially awkward adolescent has been shattered, replaced by a man who has no shame singing while wearing a 10-foot high dress. Success not only breeds poise, but also increases budgets, with much of the funds coming from the reworking of a pop gem in ads for a popular restaurant chain.

Lodged in the background of an Outback Steakhouse commercial, complete with slow-motion images of grilled meats is Of Montreal's “Wraith Pinned to the Mist (And Other Games),” off the group's The Sunlandic Twins record. The song has now become a jingle, the lyrics “let's pretend we don't exist, let's pretend that we're in Antarctica,” are replaced by “let's go Outback tonight, life will still be there tomorrow.”

Fans are irked, which surprises Barnes.

“You don't have a sense necessarily that anyone cares that your actions will impact anyone. I come from blue-collar roots, my grandpa was a truck driver and my dad was the first one in his family to go to college. There's no real concept of selling out, that's sort of a luxury for the upper classes.”

Barnes, who has eaten at Outback a couple of times, acknowledges that the incident is simply an absurd little footnote to his career. “It's obviously not going to affect my songwriting or the way I make music,” he says

Songs about restaurants are irrelevant especially when there are more important matters. For Barnes, it's being a father.

The origins of Hissing Fauna reach back to Oslo, Norway where Barnes, his wife Nina and daughter Alabee relocated to, taking advantage of the country's health benefits it provides for artists. Living in a friend's apartment, both husband and wife deal with the stress and anxiety that comes with being new parents.

Adding to that was the different environment in which Barnes says he was overwhelmed by. He was depressed, and matters became worse upon return to their hometown of Athens, Georgia. Not having home of their own to return to (plus the band's subsequent tour) resulted in the couple splitting up; his wife and daughter returned to Norway.

Alone in a room with a laptop, mini keyboard and what he calls a “crappy little mic,” Barnes was at his most personal. Previous narrative song structures were replaced with autobiographical lament.

One only need listen to “Heimdalsgate like a Promethean Curse” with its opening wail of “I'm in a crisis, I need help.” The soaring plea is lined with an equally sprawling pop synth melody, striking a balance that suggests through the bad comes the good. For, it was this record that saved Barnes' life.

“I wasn't really thinking about making a follow-up to The Sunlandic Twins . I was just making music as therapy to distract myself or make myself feel like things were getting better,” he remarks.

Life nowadays couldn't be healthier. The family is reunited, a new record is on store shelves and there's the ambitious tour that Barnes refers to as “an event.”

Hissing Fauna, Are You the Destroyer? is currently available. Of Montreal will perform Jan. 26 at the El Rey Theatre in Los Angeles, Jan. 27 at the Avalon in Hollywood and Jan. 28 at the Troubadour in West Hollywood. For more information, visit www.ofmontreal.com.