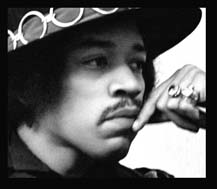 This year's Oscar nominees have all been announced, so many Angelinos will be flocking to theaters in the next few weeks before the awards ceremony to see some of the films while they're still playing on the big screen. Trying to catch two or three movies in one Saturday afternoon can be kind of exhausting though.

So, why not take in some breathtaking artwork while you're taking a breather in between films? Currently, the ArcLight is presenting some amazing photos that you definitely don't want to miss – you might even want to skip that third movie and use the time to really look at all of the photos in this exhibit.

Meandering through all three levels of the ArcLight, you can fill your eyes with black and white images of public figures from the late 1960s and '70s. You'll recognize many of the faces from entertainment and politics that are captured by photographer Gilbert Weingourt.

Born in New York, Weingourt's interest in photography began at an early age, but his true passion for the medium started when he joined the Air Force and visited Japan. While on assignment in Beverly Hills, Weingourt realized the world of stalking celebrities paparazzi-style would never be for him.

According to Weingourt, most of the photos in this exhibit resulted from chance encounters. He says all of the images are cropped to “leave out all but the essential elements of the photograph to arrive at a more intimate, personal portrait of the subject. Hence the title: Up Close & Personal .”

One just has to glance at the force of Kareem Abdul-Jabbar's stare or the intensity in Jimi Hendrix's eyes in Weingourt's photos to feel like you're right there with them. Let these images transport you to the past before you grab your bucket of popcorn and head back in to the movies.

ArcLight Cinemas is located at 6360 W. Sunset Blvd. in Hollywood. Admission to the exhibit is free, just let the ticket takers know you are there to view the exhibit. For more information, visit www.arclightcinemas.com or www.exposedinblackandwhite.com.