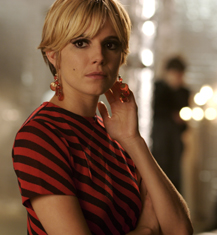 “I think that there are very few roles, especially when you're my age, that have substance and are interesting. [Edie Sedgwick] was such a fascinating character and there's such a huge arc in the film – that was rare,” says Sienna Miller of her latest role in the film Factory Girl . “ It was emotionally challenging, but that was completely rewarding as an actress.”

Best known for directing the documentary Mayor of the Sunset Strip , in Factory Girl George Hickenlooper delves into the life of Sedgwick who was born with a silver spoon in her mouth and moved to New York City in the mid-'60s. Sedgwick quickly established herself in the upper echelons of artsy Manhattan by becoming fast friends with Andy Warhol (Guy Pearce) and, thanks to her good looks and a little help from the famed fashionista Diana Vreeland (Illeana Douglas), made the covers of popular magazines like Life and Vogue .

In playing the role, Miller had her thespian work cut out for her as Sedgwick's rise to fame came just as the recording age came to flower and Sedgwick was relentlessly caught on film and tape. Fleshing out Sedgwick entailed a bit of homework.

“A lot of the people that I met [who knew her personally] said she had this amazing voice. It's deeper than mine, so I had to kind of growl and smoke a lot of cigarettes. The thing about that era was that they documented everything. Warhol used to often tape his phone conversations with Edie, even when they were just [about] watching a movie. I had this CD of all of her conversations and she just had this interesting speech pattern. I worked on her for about a year, [to embody] her total character”

It would seem that after she arrived in New York City, Sedgwick's raison d'être was to obtain fame at all costs. She eventually got her wish, but it came with a price.

When asked about her thoughts on the party-all-the-time images of starlets, Miller doesn't mince words. “I think everyone's entitled to their own decisions, and I also think that 18-year-old girls all over the world are doing what those girls [in the media] are doing, they're just not getting photographed doing it. I think it's healthy that girls should go out and want to have fun – I'm not going to judge anyone.

“I think that Edie was different. She had this really psychologically disturbed upbringing and reality was a hard place for her to exist in. Taking drugs and escaping from that made sense because she was given Valium at the age of 8 when she was crying, to calm her down – that was her world”

Sedgwick lived her life at an exponentially quicker pace than the average person and paid the ultimate price for it, which is not lost on Miller. “I've heard the stories – her brother actually told me – that she had this lifeline [in the palm of her hand] and it was broken … This palm [reading] person was reading her at the time and just kind of froze. Edie says, ‘I know, that's why I'm living life [to the fullest].' She had this really fatalistic sense about herself, she knew that she was going to die young and that's why she kind of exploded.”

Contrary to the rose-tinted image that memories of the '60s seem to evoke in some, the scene around Warhol's studio was equally famous and infamous. To put it mildly, it wasn't all go-go boots, incense and peppermint, or for the weak-spirited.

“The Factory was kind of dark. It was this place for misfits and vibrant, colorful people, but I've heard from the people that were there that it was a very intense scene. I think that comes across in the film. Edie's brother watched it and said that we got it, that we nailed it. So, if everyone else in the world doesn't like it and he does, then I'm sure that we did an OK job.”