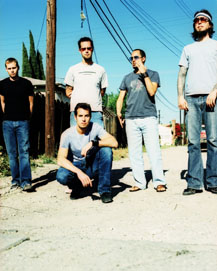 And from that simple idea grew one of the biggest parties of the year for fans of 311. Started in 1997, the band has come to New Orleans every other year to play a special concert, performing most every song they’ve ever recorded including favorites such as "Down" and "Amber," along with rarities and cover songs, such as Led Zeppelin’s "D’yer Mak’er."

So the city that boasts the debauchery of Bourbon Street can now also say that March 11 is officially known as 311 Day – a proclamation made by the Mayor of New Orleans.

"I think it’s the band at our peak so far; it’s the tightest and best that we’ve played," says Hexum about this year’s 311Day performance. Captured on DVD and released as 311 Day: Live in New Orleans, the two-disc set contains 64 songs and close to five hours of live concert footage and behind-the-scenes antics with the band.

"It’s like running a marathon," says Hexum of the show, who physically prepares with his bandmates, vocalist SA Martinez, guitarist Tim Mahoney, drummer Chad Sexton and bassist P-Nut, months in advance. Yet when the day finally arrives, the band admits that the adrenaline from the crowd keeps them going long and strong.

"The roar of the crowd was just so deafening, they were so excited," says Hexum of their devoted fans. "I just can’t believe they stayed on their feet for the entire time. It’s one thing when you’re running around stage and dancing, but these people gave back the energy that we were putting out there for the entire time," says Hexum. "It was really moving."

311, a band who most recently hit number one with The Cure cover tune "Love Song," has been serving up melodic funk rock with messages of love and positivity since their 1993 inception. Fans admit that being part of "The Hive" – the name given to the band’s devoted following – is not just about the band’s music, but about a lifestyle. Hexum describes the huge, fan-organized party on the day before 311 Day.

"There was a free 311 party on March 10 in the French Quarter that was just packed. The DJ was playing nothing but 311," describes Hexum. "It was 500 or more fans completely rocking out on the dance floor, singing along with every word. Seeing footage of these people just going crazy to our music and completely losing their inhibitions and being totally swept away by our music was really incredible to me. It brought home how important [the music] is to people."

Although New Orleans won’t be hosting a 311 Day in 2005, Hexum insists that there’s a good reason for it. "We want to concentrate on making our next record," he says with smile. So what’s the inside word on the album slated for the summer of 2005?

"We want the songs to be innovative yet fun, and I want the lyrics to be very personal and revealing," admits Hexum. "We’re trying to find a new hybrid, a new combination of dance hall rhythms, but with funk and a strong emphasis on melody."

Featuring fans that traveled across the country and even across the globe, 311 Day: Live in New Orleans captures the spirit and energy of the band and their fans amidst a festive Mardi Gras atmosphere. One fan captured on DVD seemed to sum it up best when asked, "What are you most excited about on 311 Day?" He simply replied, "Dude – 311’s here!"