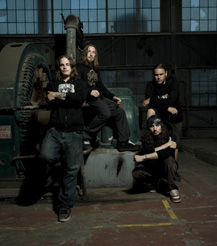 I'd like to put my own two cents in reagarding a certain delicate situation that seems to plague the musical landscape of Los Angeles: the lack of quality, good-for-nothing, head-banging metal bands.

Good luck trying to find it in areas like Echo Park and Silver Lake. Sure, those areas have noise all right, but most of the time it's caused by effects pedals and not an insane guitar riff.

Even the hallowed shrine of Sunset Boulevard has changed. The metal meccas lining the Boulevard were built and demolished soon after by acts like Mötley Crüe, Poison and most notably Guns N' Roses.

Currently, all the debauchery happening there now is debutantes being swarmed by paparazzi, gone are the wunderkinds that perform Satan's musical biddings.

L.A. needs the metal more than metal needs L.A. Rest assured, the riffs that have been missed are slowly emerging from the underground. Again, I'd like to put my own two cents in on one particular act: L.A. band 2Cents is as metal as you can get.

Usually, the double duties of frontman/drummer call to mind such rock legends as Don Henley (the Eagles) or Levon Helm (the Band), but to see it done in this music genre, well, it goes against all logic. Frontmen should stand proud and simply shred.

Though he doesn't wield a mighty axe, Adam O'Rourke (lead vocals, drums) makes up for it with ferocious pounding and near destruction of his kit at each performance. His screeching yelp aligns with the thunderous bass lines of Jesse Fishman and dual guitar frenzy of Dean Woodward and Dave O'Rourke. The resulting sound builds up to the madness contained throughout their Gotizm/Atlantic debut, Lost at Sea .

Beer, blood, mythical dragons, even tales of the grand wizard Gandalf from the Lord of The Rings are often the subjects (underlying mind you) of metal songs, but a wedding dress? As long as the dress is donned at a funeral, all is right with the gods watching below. “The Wedding Dress'” loud and soft melodic respites smash against the sea of O'Rourke's drums, while the singer's emotive screams are married perfectly with the guitar solos that weave in and out of them.

While there aren't any additional articles of clothing explicitly detailed on the rest of the record, the relentless compassion of the group's music transmits messages of the ruination of music by pop groups (“Victims of Pop Culture”) and personal mourning (“A Song for Darrell Abbott”).

The latter is a loving tribute to one of the group's inspirations. Murdered in 2004, Abbott a.k.a. Dimebag Darrell was the lead guitarist for heavy metal heroes Pantera.

The powered groove exhibited by Abbott has carried over to Woodward and O'Rourke. The two make for a formidable team on “Wired's” intricate layers of sound that are best described as sludge make for a high wire act that is bludgeoned and beaten, but ultimately makes you bash your head in glory.

The head banging is culled once more for the epic closer and title track, “Lost At Sea.” Built on a foundation of stop and go monster riffs, the song ventures to unforeseen choppy waters, the chorus is a complete, unconscious stream of sounds where only the primal shrieks of “Lost At Sea” are most clear.

Quite simply, you've been wrecked.

Lost At Sea is currently available. 2Cents will perform Feb. 1 at the House of Blues Sunset Strip in West Hollywood. For more information, visit www.2centsmusic.com.