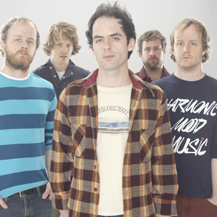 Ignorance is ignorance, but lack of awareness from an indie rock frontman of other indie bands or record labels, well, that's just plain weird. He doesn't want to sound above it all, but Alec Ounsworth, lead singer/guitarist of Clap Your Hands Say Yeah, has never heard of bands like the Rapture or DFA Records.

The radio propulsion of “Satan Said Dance” from CYHSY's new album, Some Loud Thunder, is a fresh sound for the band best known for its stripped-down, muted guitars. Anchored by its drumbeat, tints of disco might lead one to pigeonhole the group with a lot of today's indie rock bands – something Ounsworth would disagree with.

If ignorance is bliss, Ounsworth has succeeded without having to know any of the hot new acts being touted on the Internet. Two years ago, these same MP3 blogs brought Ounsworth and the rest of the band – Robbie Guertin, Lee Sargent, Tyler Sargent and Sean Greenhalgh – into prominence.

To this day, the group releases its own albums, even with a plethora of offers from major labels. Such activity creates attention, but if the music is as good or even overshadows it, then it's a whole other story. Amongst stellar album reviews, interest within the media grew, as did the number of new fans, and the spotlight only intensified as new songs were primed for a sophomore effort.

Message boards indicate displeasure at some songs not sounding like their live recordings, but at the end of each recording session, it's Ounsworth's opinion that matters.

Startling is the addition of producer Dave Fridmann on the record. Having produced the last Flaming Lips record ( At War with the Mystics ), it seemed to be an unlikely pairing.

Ounsworth liked Fridmann's methods and appreciated the producer's fast approach to songs and immediate instinct (akin to Ounsworth's own process of early song demos). The efforts paid off.

“Underwater (You and Me)” and its wave of chiming bells and crashing drums is a perfect complement to the instrument that is Ounsworth's voice. While an added orchestra might intensify songs like “Underwater,” it's not necessary Ounsworth says, considering their self-titled debut release was made between $5,000-$10,000.

Being artistically restricted by a record executive is one thing Ounsworth isn't fond of.

He says, “Nobody can give me a real legitimate reason as to why we would in fact sign to be on a label or to join some sort of relationship in which it was a chore. I don't ever endeavor into anything that takes any sort of commitment.”

The DIY approach allows that lack of obligation, but can prove tiresome. Never-ending runs to the post office to ship CDs had gone on for too long, almost to the point, Ounsworth says, that the band could've been swept away by it and not focused on making records.

Success allows for a few perks notably a CD distributor, a publicist and a booking agent. And while he knows who David Bowie is, it doesn't faze him one bit to know that Bowie is a fan and has been spotted at their shows.

“Success has always been putting out a good album and doing a good show – that's it. It's nothing more than that. It's not how many albums you sell or who comes to your show or anything like that. Success is your work. It's finishing it and making sure that it's complete.”