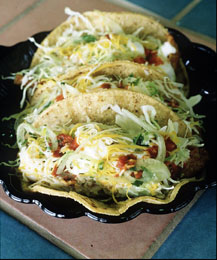 Ralph Rubio was hooked. The warm corn tortillas caressed piping-hot beer-battered-and-fried fish. The sturdy crunch of finely-shredded cabbage melded with a trio of garnishes: a dollop of mayonnaise-based sauce, a squeeze of fresh citrus juice, and the just-right spice of salsa.

Rubio tasted his first fish taco in 1974. It was midmorning in the small fishing village of San Felipe in Baja, Mexico. He was a freshman at San Diego State University, and it was a spring break that would change his life.

He opened his first fish taco eatery at Mission Bay in San Diego in 1983.

Now there are more than 160 Rubio's Fresh Mexican Grills in the Western United States.

“A fish taco is an extraordinary thing flavor wise,” he says. “The complex flavors and textures all go together. I had one this morning. What a great breakfast. You may not want a carne asada burrito for breakfast, but a fish taco and a side of pinto beans are perfect.

“Much of the art of a fish taco is having the right batter. The right amount of mustard, oregano, garlic, beer and pepper produce a lot of flavor. I'm into flavor.”

Rubio says his company doesn't plan to mess with a great thing. He says that although he is always seeking new tastes and flavor combinations, the company won't make any big changes to their traditional fish tacos that are made with fried Alaskan pollock.

“The fish taco defines the best of Baja,” says Deborah Schneider, chef and author of Baja – Cooking on the Edge . Schneider says that according to legend, Asian fishermen living in Baja long ago inspired the idea of using a tempura-like batter on locally caught fish. The crisp-fried fish was teamed with local ingredients, and an early kind of fusion cooking was born.

“Like all great street food, the perfect fish taco is very, very simple.

Success relies on fresh ingredients, plus the technique of double frying (the fish), and most of all, speedy service. The fish must be cooked in front of you and eaten within a minute of leaving the fryer. It's a little piece of heaven.”

Double frying is essential, according to Schneider. The technique involves coating each finger-size piece of firm fish with a mixture of flour, beer and seasonings (the consistency of pancake batter), then briefly frying it and draining it. Just before serving, the fish is fried again. Schneider says if it's not double fried, the fish takes a long time to cook and may become soggy instead of brown and crisp.

And, she says, the double-fry approach can offer a big advantage when entertaining at home. The fish can be fried in its initial step the day before and refrigerated. The sauces can also be prepared and chilled a day in advance.