Because I Said So: (Universal) 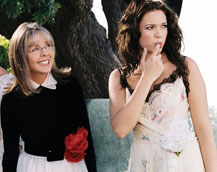 The fluttering hands, the rolling eyes, the odd shriek of delight or dismay, the sentence fragments – Diane Keaton's always had a touch of the exasperating. It's been part of her charm.

But try Diane Keaton on a Red Bull bender. Then have three younger actresses, playing her daughters, imitate her.

There are moments in Keaton's latest, Because I Said So , where she's jabbering and fluttering and shrieking, and Mandy Moore, Piper Perabo and Lauren Graham are chiming in, all at once – where I thought my head would explode.

It's a smothering-mother comedy about a hip, single mom (Keaton) who won't let her youngest (Moore) make her own romantic mistakes. It's a messy comedy, but with lots of heart and plenty of laughs.

Milly, the youngest, is doing the romance thing all wrong. She's insecure, snorts when she laughs and jabbers just like her mom when she meets a new suitor. The threat, “I'm going to be just like you, Mom. I've given up!” forces meddling Mom's hand. She writes a book-length personals ad and interviews date-candidates for Milly.

Milly doesn't know about this. Daphne sets her up with Mr. Architect (Tom Everett Scott), but discovers that Milly is also being pursued by Mr. Wrong, a musician (Gabriel Macht).

Soon Milly is being courted by two prospects. If only Mom could talk her out of seeing the guitar player/single dad with a hunky single dad of his own (Stephen Collins). Daphne whines, nags and says what mothers have always said when they run out of reasons.

“Because I said so!”

It's a relief any time a guy pops up, as the movie seems to take a breath when the men arrive, even though Keaton never does. The jokes cross over into girls-club vulgarity, but vulgar-cute.

Keaton loses no opportunity to show us what the body of a 60-year-old woman might look like. Granted, she's a 60-year-old who has never married or had children and has at least had access to a personal nutritionist and trainer for 30 years.

There's a charming bonhomie among the sisters (Graham, TV's “Gilmore Girls” mom, shines), and there are many cute touches to the romances – save for Daphne's, which is refreshingly raunchy. It's very funny to see Moore pick up Keaton's gestures and match her performance to the Oscar winner's.

But if you've ever found Keaton's mannerisms annoying, from her “La de dah, laa de dah” days through her First Wives Club - Something's Gotta Give renaissance, imagine her times four. You'll need to go on your own Red Bull bender just to keep up.