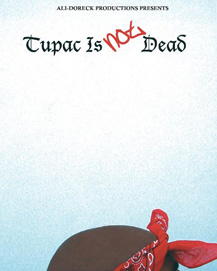 Every year, the Pan African Film and Arts Festival showcases over 1,000 submissions of films from new and veteran African-American filmmakers in the United States and abroad. Everything from hysterical comedy and graphically detailed dramas on the suffering of other countries, to simple and informative shorts are shown.

Many submissions are about music – rap, world, jazz – and everything else in between. There are three this year that stand out from the others.

In the first, director Chad Dorek and executive producer Tracey Ali join forces on Tupac Is Not Dead . Carla has an unyielding fixation with the late rapper, and it drives her best girlfriend Julia crazy. Their friendship is tested when they lose their jobs due to Carla's obsession (She insists Pac is not dead and will prove it.).

Secondly, if you listen to “The Tom Joyner Show,” you will instantly recognize the wise cracks of comedian, actor and radio superstar J. Anthony Brown. Brown pays homage to Jack “Blackjack” Ashford in Tambourine Man .

Blackjack was a part of the in-house band the Funk Brothers during Motown Records' heyday in the '60s and '70s. You can hear him on the songs, “War ,” “Nowhere to Run” by Martha and the Vandellas and the Marvin Gaye classic “I Heard It Through the Grapevine.”

Third, director Clay Walker has brought forward many faces that people would never have seen or heard from. His Post No Bills, about political poster artist Robbie Conal, became a fixture on PBS for three years.

This time around, his focus is on Nat King Cole's younger brother, Freddy Cole. The Cole Nobody Knows chronicles the musical career of Freddy, a graduate of the New England Conservatory of Music who was overshadowed by his crooner brother.