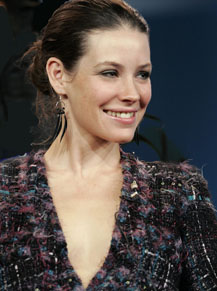 Evangeline Lilly, who plays the beauteous Kate on “Lost,” confesses she's part gypsy. It's that restless spirit that almost made her turn down the chance to costar in the ABC hit television series. It's the same wanderlust that has kept her on the move.

“As soon as I left high school I cut my ties with everyone I knew and took off to a new city and I started again,” says Lilly.

For the next three years Lilly moved to six different places, each time assuming a new persona. “I tried out different personalities and characters. It was an amazing time, very lonely but very formative. What came out of that was I got a piece of this person and a piece of that person and formulated the person I wanted to be from all those different characters I tried on.”

Those experiences taught her not to care what other people think. “That was very empowering,” says Lilly.

Lilly, who longs to be a writer, wasn't sure she wanted to act. She had no designs on becoming a model, either. But she found herself doing commercials to pay her way through college. “It was the most degrading work I've ever done,” she shakes her head.

“I've been a grease monkey, a flight attendant, a waitress – lots of different odd jobs, but that job was so degrading because their version of what an audition is, is you show up in a room looking as pretty as you can look, and a man who spends all day looking at pretty women looks you up and down and makes a decision based on whether you flirt with him or whether you're pretty enough or whether you go with him for a drink afterward,” she says.

“I would have none of that. I would walk in, say my name and walk out. I had no interest in being part of that. I still got jobs, but I could feel what I was involved in. I could feel the energy around me that was just putrid.'”

For a while she worked as a lowly extra, toting her school books with her while she waited on set to move in the background of a scene. “I used to watch the actors and actresses and think: ‘I'm am so glad I am not you,'” she laughs. “‘I am so glad. I can just sit back here, do my work and not have anyone pay any attention to me. You poor things.' Cut to three years later.”

Of course, three years later “Lost” arrived and Lilly, 27, finds herself the center of the media frenzy that has dogged the show. When her house in Hawaii (where the show is filmed) burned down a year ago, she says she was mortified to find the paparazzi, like jackals, eager to scavenge for her personal memorabilia.

She's been romantically linked with “Lost” costar Dominic Monaghan, but refuses to say whether they are engaged (she wears no ring). “I try not to talk about my personal love life in the press because I'm a firm believer that given an inch they will swim all over it,” she says.

“I always keep really mum about my love life. I've seen so many tabloids where they have a beautiful picture of a couple and they tear a line down the middle.”