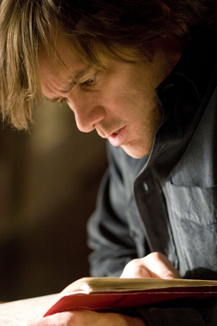 It is all about the number 23. Apparently, there is an underground phenomenon that has been revolving around the number for quite some time. Actor/comedian Jim Carrey, along with director-friend Joel Schumacher and co-stars Virginia Madsen and Danny Huston, were not aware of the number craze until a friend of Carrey's clued him in.

“He was seeing it everywhere and had a book full of 23 phenomenons. He handed it to me and I thought he was crazy, then I started seeing it everywhere,” Carrey says. “I explained it to a friend and he said that he just read a script called The Number 23 . I read the script and was compelled and freaked out by it.

“I gave it to him and left the room. When I came back, he turned to every 23rd page and circled every 23rd word. He was looking for a code and that's what I wanted to do with the audience.”

After seeing too many coincidences with the infamous number, Carrey changed the name of his production company from Pitbull Productions to JC23. Ironically, there is a pitbull in the movie that acts as his character's guide throughout the film. While Carrey is not crediting the number with changing his life, his performance in the film will definitely have people looking at him in a new way.

In Number , Carrey plays Walter Sparrow, a hard-working dog catcher with a loving wife, Agatha (Madsen) and teenage son. While waiting for Walter, Agatha walks into a used bookstore and peruses a worn copy of The Number 23 .

She gives it to Walter as a birthday present, and he soon becomes consumed with the characters. He dives deep into the story of the mysterious detective Fingerling (also played by Carrey in the film), who's having a tempestuous relationship with the hot-looking Fabrizia (Madsen again) while trying to solve a suicide.

Walter is pulled in further to Fingerling's dark world and cannot, or does not, want to escape. Soon, his obsession with the number 23 devours him as he tries to figure out its meaning.

Walter sees the number everywhere on the street and in window signs. His license plate number and home address even add up to 23. He doesn't understand how he and the detective could have so much in common since they are polar opposites. The way they grew up, the women in their lives and the fact that Walter finds the number too fascinating and absorbing to simply let it go.

Though this is not Carrey's first dramatic role (see Man on the Moon and The Truman Show ), it is certainly his most intense. During his scenes with Madsen as Fabrizia, he becomes a sexy beast with a voracious appetite. This is also the first film in which he plays two characters that are dramatically dissimilar.

Schumacher had Carrey, Madsen and Huston play their dual roles in the same day. So, Carrey had to switch between Fingerling's dark side and Sparrow's aloof demeanor on a daily basis.

“I love Walter. He's a family guy who wants to have a normal life. He's most of us that want things to be stable. We just want to keep things from changing too much,” says Carrey. “I like that character, he was very loving with his family and loved his job. The other character [Fingerling] was a little different for me to play.”

Carrey's film choices have been eclectic to say the least. One minute he's an attorney who can't lie ( Liar, Liar ) or a bank executive who lets out his wild side with the help of an ancient mask ( The Mask ). Then, he's a comedian with too many alter egos and a man whose whole life is a television series.

Mind you, he did the TV movie while still performing on “In Living Color.” Carrey likes to surprise not only himself but the audience as well.

“The way my life and the universe works are basically very mysterious. Movies find me, and I allow them to find me. When it becomes a real good feel, I do them and in this case it was the 23 phenomena,” he says. “I really had always thought of myself as somebody who lives in the middle of the wheel and is able to go to the extreme to the outside of the wheel in any direction.

“The best-case scenario for me is to be able to be centered, then go out zany and funny, and then do something that has depth to it. It's many different coats to paint with, and I would hate to get trapped into one little thing.”

Perhaps Carrey's newfound outlook on life is attributed to his new girlfriend, actress and former Playmate Jenny McCarthy. “I feel that our relationship happened at a time where I am more ready than I've ever been in life to have a relationship. We both encourage each other and we're on the same path,” he says.

Even Schumacher, who Carrey worked with on the 1995 film Batman Forever , says that this is the happiest Carrey has ever been. His appearance is different: he wears his hair long and just seems to be in a happier time in his illustrious career. Carrey says, “My spiritual journey has been a good thing I've been on that I guess some people would say I'm obsessed with in a good way.”

Audiences needn't worry, though. Carrey hasn't lost his trademark sense of humor. He can still crack a joke, flash a smile and retort witty comebacks when asked a question.

What also hasn't changed is the reason he's still in this business. He hasn't forgotten why he does what he does, and that will stay with him for a very long time.

“The one thing that I'm really proud of is that I love people and I want them to enjoy the work absolutely, without questions. I try to do things that actually connect with me, whether it is comedy, drama, or any of those things. I don't consider patronizing the audience,” he says, concluding, “I consider what's true for me and I hope that it will connect with someone.”