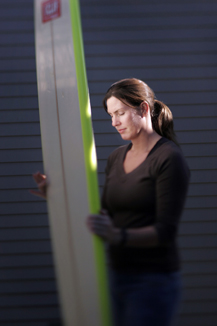 Pregnancy is supposed to be emblematic of minivan-driving soccer moms, not big-wave-charging surfers. Yet there was Naomi Gerhardt, tucked beneath four millimeters of neoprene, in the belly of mother Sarah at the infamous break Mavericks near Half Moon Bay.

“You are the youngest surfer to ever catch a wave at Mavericks,” Gerhardt tells 3-month-old Naomi. “What do you think about that?”

Naomi probably won't know for a few years. But some young female surfers think plenty about Gerhardt and what she means to their future.

The Cabrillo College chemistry professor has helped inspire a new wave of women to paddle into the once-male sanctuary of extreme surfing. Only about 20 women worldwide venture into super-sized surf – waves that measure more than 20 feet on their faces.

Though there are few big-wave career opportunities for even the men, more women are being drawn to the dangerous sport because of the exploits of such adrenaline junkies as Gerhardt and fellow Santa Cruz surfers Jenny Useldinger and Jamilah Star.

Central coast teenagers Savannah Shaughnessy, 17, and Sierra Partridge, 18, lack the necessary experience to try Mavericks this winter, but they want to join the exclusive club someday.

“It's a pretty macho atmosphere, but these girls have worked their way up the ranks,” says Evan Slater, an accomplished Mavericks rider and editor at Surfing magazine.

Until Gerhardt arrived in 1998, no woman had tried to conquer the monster waves. Her feats inspired Useldinger, who now gets her big-wave fix in Hawaii most of the year.

“We spend our whole lives with the boys telling us we can't,” says Useldinger, 21, the first woman to surf a treacherous break called Dungeons in South Africa. “When you see another female doing it, it's like, Oh, I can do that.”

Most surfers tackle giant swells for the amusement-park thrill ride or for bragging rights. Gerhardt, 32, did it to escape.

Surfing transported her “to a totally peaceful world,” where she could forget the difficulties of caring for her mother, who used a wheelchair, while growing up in Pismo Beach.

After graduating high school she made a pilgrimage to Hawaii to sample her first big waves. She embraced the challenge, and for the next three years juggled classes at Cal Poly-San Luis Obispo with surfing in Hawaii.

Word of a big wave at Half Moon Bay led Gerhardt to move to Santa Cruz. She paddled out to Mavericks in fall 1998.

She discovered she wasn't mentally ready that first time because of the demands at school. Do I really want this? Gerhardt wondered. If she did, it would take sleeping less and training more.

When Gerhardt caught a wave her third time out, all the men cheered in support, she recalls.

“Big waves help me know what I value most, what my priorities are, what I will settle for,” says Gerhardt.

As the subject of the documentary One Winter Story , she shares those lessons with other women interested in big-wave surfing. Gerhardt tells them it takes years of seasoning to overcome the fear of facing walls of water some six stories high.

Her proteges, Partridge and Shaughnessy, have prepared for Mavericks by surfing big waves on Oahu's North Shore this winter. Gerhardt also took Shaughnessy to Mavericks last year for a test run. Although the teenager paddled out, it was for research only.

“I wasn't being silly,” says Shaughnessy. “I wanted to know how far behind I am before I go out there to try to catch waves. I wanted to see what it was like, how big it is.”

Partridge, whose twin, Hailey, also is a promising Santa Cruz surfer, wants to find out, too.

“Just the rush that you get,” she says of her attraction to it.

Some surfers are wired for mainstream contests, where stringing together a succession of maneuvers, typically in smaller surf, is the goal. Others prefer to specialize in aerial tricks, with a chance of going on far-flung trips to shoot magazine spreads.

The handful of big-wave riders? “We're another breed,” says Dustin Tester, one of the few women to surf Jaws, the outer reef break in Maui that surfers can ride only with a personal watercraft and a tow rope. “It takes people who are almost desensitized to the extreme environment.”

Places such as Waimea Bay in Oahu and Todos Santos Island in Baja were popularized as big-wave spots in the 1980s. But the big-wave revolution really began in the early '90s, when Mavericks was unveiled to the world. Later that decade came the advent of tow-in surfing, which uses watercraft to reach fast-charging waves far from shore.

Now surfers like Useldinger track winter storms across the globe to hunt for massive swells at places such as Cortes Bank far off the coast of San Diego, Ghost Tree off Pebble Beach and Dungeons in South Africa. Their pursuit has spawned a women's category in the Billabong XXL Big Wave Awards, a lucrative competition to see who gets photographed riding the winter's biggest wave. Jamilah Star, who like Useldinger lives primarily in Hawaii, is the two-time defending champion for her conquests at Mavericks.